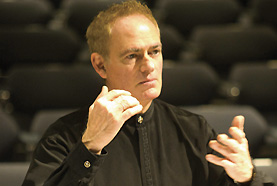 Acclaimed violinist Jacques Israelievitch, who enjoyed an international career as a soloist, conductor and teacher, died Sept. 5 in Toronto. He was 67 years old. Professor Israelievitch taught in the Music Program in the School of Arts, Media, Performance & Design at York University.

Prof. Israelievitch had the distinction of being the longest-serving concertmaster of the Toronto Symphony Orchestra. Retiring in 2008 after 20 years, he joined the faculty of York University’s School of the Arts, Media, Performance & Design (AMPD), as professor of violin and viola. He inspired young musicians through master classes and school performances around the world. As music director of the Koffler Chamber Orchestra since 2005, he gave devoted amateurs an outlet for their talents.

He was diagnosed with aggressive, metastatic lung cancer in late February this year. On Aug. 14, in a special ceremony at his home, he was presented with the Order of Canada, one of this country’s highest civilian orders, recognizing outstanding achievement, dedication to the community and service to the nation for nearly three decades.

“We are mourning the loss an exceptional musician, dedicated teacher and warm and generous colleague,” said Shawn Brixey, dean of the School of the Arts, Media, Performance & Design. “The impact Jacques made on young musicians’ development as a professor and as the conductor of the York University Symphony Orchestra is beyond measure. We were honoured when he joined our faculty and he will be greatly missed by all who had the pleasure to connect with him through his work or through his music.”

Prof. Israelievitch’s discography of more than 100 albums includes the JUNO nominated Suite Hébraique with pianist John Greer, Tchaikovsky: The Ballets with the St. Louis Symphony, Beethoven’s Romances with the TSO; and the chamber recordings Suite Française, Suite Enfantine, Suite Fantaisie, Solo Suite, and Hammer and Bow. In 2006, he broke new ground by releasing the first complete recording of 42 Studies for Solo Violin by Rodolphe Kreutzer.

Among his more recent achievements was a successful duo partnership with pianist Christina Petrowska Quilico, also a professor in the School of Arts, Media, Performance & Design, with whom he gave many recitals. This June, the two launched their first duo CD, Fancies and Interludes, featuring music by four established Canadian composers, on the Canadian Music Centre’s Centrediscs label. They also recorded all 28 Mozart sonatas for violin and piano, a project they initiated with a one-day marathon in May 2014, and repeated over several concerts at York University this past winter and in a performance of four late sonatas this July at the Chautauqua Festival. Despite severe pain and growing weakness, Prof. Israelievitch was determined to complete the recording sessions, which they did in May. The multi-CD set will begin releasing in early 2016.

“Jacques was such a role model for me as an inspirational and motivational musician and a friend. He helped me climb Mount Everest in our wonderful Mozart project,” said Petrowska Quilico. “ I will always remember the fun and laughter we had rehearsing and recording. What a great way to make music!”

Visual art was another of his passions, one he shared with his wife, Gabrielle. From his arrival in Canada in 1988, Prof. Israelievitch endeavoured to learn all he could about Canadian art. He was soon a central member of both music and art circles and defined a unique position for himself as the synthesizer of these cultural spheres. The couple commissioned works from Canadian artists and employed Canadian craftspeople to build objects, just as he inspired and requested music from Canada`s composers. Particularly fond of ceramic art, they became the first members of the Gardiner Museum. He also undertook collaborations that combined his music with the visual arts.

Prof. Israelievitch was an Officer of the prestigious Order of Arts and Letters of his native France. In 2008 he received a Lifetime Achievement Award from the Toronto Musicians’ Association in recognition of his distinguished contribution to the performing arts in Canada.

Born in Cannes, France and raised in Paris and LeMans, Prof. Israelievitch made his debut on French National Radio at age 11, graduated from the Paris Conservatory at 16, and went on to be a prizewinner at the International Paganini Competition. His teachers included some of the world’s leading string players – Henryk Szeryng, Janos Starker, William Primrose and Josef Gingold.

Prior to moving to Toronto, Prof. Israelievitch began his orchestral career at age 23, when he was appointed by Sir Georg Solti as assistant concertmaster of the Chicago Symphony Orchestra. After six years in Chicago, he was named concertmaster of the Saint Louis Symphony, a position he held for 10 seasons.

With numerous solo engagements to his credit, he collaborated with Solti, Giulini, Slatkin, Davis, Dausgaard and Frühbeck de Burgos, appearing with many of the world’s major orchestras. As a distinguished chamber musician, Prof. Israelievitch performed with pianists Emanuel Ax and Yefim Bronfman, and cellist Yo-Yo Ma. He was a founding member of the Toronto Symphony Quartet and the ISA (Israelievitch/Smith/Ahn) Trio, and appeared for many seasons with the Naumburg Award-winning New Arts Trio at the Chautauqua Institution in western New York. With his son, percussionist Michael Israelievitch, he formed the Israelievitch Duo, which commissioned and premiered works by such distinguished Canadian composers as Michael Colgrass, Srul Irving Glick and Murray Adaskin.

He is survived by his wife Gabrielle; sons David, Michael (Ana-Sofia Campesino) and Joshua and two grandchildren, Aya and Bennett. All were by his side in his final weeks. His mother and remaining sister and brother live in Paris.

A private service has taken place and details of a public memorial will be released as soon as they are available. The family requests that donations in memory of Jacques Israelievitch be made to the newly established Jacques Israelievitch Endowment for Violin/Viola and Interdisciplinary Arts at York University, which will be granted to an exceptional incoming student enrolled in the Department of Music in the School of the Arts Media, Performance & Design. To make a donation in memory of Prof. Israelievitch, visit https://cause2give.unxvision.com/EDMWeb/DonationForm.aspx?FormID=544&LanguageID=1 and select “Other” for the “Please designate my gift to” section and then specify below “Jacques Israelievitch Scholarship”.