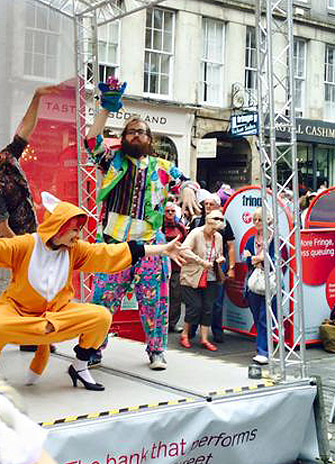 New every night and with “something for everyone,” York University theatre students created an interactive, partially improvised and fully comedic new play titled Nudity, Free Beer, Good for Kids (NFBGFK) for the Edinburgh Festival Fringe (Aug. 7 to 31), one of the largest arts festivals in the world.

Like a play – about a play – within a play, NFBGFK is a competition between three rival groups vying to be the ones to put on their fringe show, Farmhand Joey, their own way (featuring nudity, free beer or good for kids). The show runs like a pitch to the audience who are “investors” for Farmhand Joey. Every audience member receives a handheld remote and can vote as often as they like throughout the show for their favourite contender. The scores are tallied at the end of the show and prizes are awarded to the winning group and the audience that supported them.

Full of enthusiasm for their international success, NFBGFK will be reprised in Toronto on Sept. 11 at The Box Toronto, a studio and theatre at 103-89 Niagara St. in Toronto. Tickets and information are available online.

NFBGFK had 19 performances at Venue 13, which is located on the Royal Mile, a main street in Edinburgh. Many Fringe shows stop by the Royal Mile to perform excerpts of their show and hand out flyers. The result is a colourful and chaotic din with many actors, musicians and dancers competing for the pedestrians’ attention.

The over-the-top title was one of the ways the group got noticed. Sardines Magazine said “the award for title most likely to attract for 2015 should perhaps go to Nudity, Free Beer, Good for Kids.” Other review quotes included “inventive lo-fi charm and some zippy performances” from The Scotsman and “excellently presented.… It was more of a cold shower I was needing. Very good” from MumbleTheatre.com.

Fourth-year theatre studies student Drew Murdoch played John Gretsky, one of the “Good For Kids” advocates. Using what he learned in a Theatre for Young Audiences class taught by York theatre Professor Bellarie Zatzman and doing the exact opposite, his comedy was based on talking down to the audience and being “generally dreadful.”

“Performing in and attending one of the largest arts festivals in the world is pretty overwhelming,” said Murdoch. “It was interesting getting here a couple of days before the festival started because we got to walk around Edinburgh when the city was almost normal but after two days it just blew up. A street that you walked down one day with maybe five  people was now turned into a shoulder to shoulder experience.”

An Edinburgh Fringe highlight for him was watching York University grads who are the clowning duo Morro and Jasp (created by Heather Marie Annis (BFA ’05, MES ’07), Amy Lee (BA ’05) and Byron Laviolette (BA ’04) perform their hit show Morro and Jasp do Puberty.

“It was a moment where everything just clicked,” said Murdoch. “I thought, these people have been where I have been. I can do this! We went as a company to see the show, and we agreed it was one of the most enjoyable pieces of theatre we had ever seen with non-stop laughter from start to finish. We just wanted to scream, ‘I go to the same school that they went to!’ in the standing ovation. It was such an empowering experience for all of us.”

Creating a play from scratch took Murdoch out of his comfort zone.

“I am a lot more comfortable with the idea of a script and a concrete rehearsal process but that was not the way that this process went at all,” he said. “The devised theatre students in our group brought an abundance of tools for us to create and develop with. There were still moments of panic with the not having a script to fall back on but having this safety net of people you trust who were confident in what we were doing was a great experience.”

Third-year theatre production student Adrienne Deeley was happy to create something from scratch. Her primary roles were costume creation and prepping the theatre in advance for the team’s arrival. She was also involved throughout the process to create the show.

“This show has shaped me as a performer in a way I didn’t think possible,” said Deeley. “I have been involved in the entire creation process, from brainstorming ideas to writing multiple scripts to choreographing musical numbers. I’ve never been involved in a show that involves dancing, singing, improv, live video streaming, projections and audience interaction through technology.

“I feel like I have the experience behind me to work in more fields than I ever thought I would work in. I understand the rehearsal process so much more now. And I have a huge respect for the devised theatre students who produce festival shows like this regularly.”