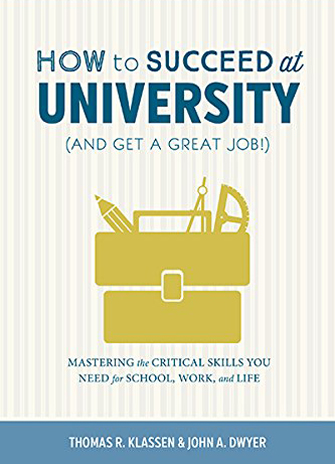 The secrets of succeeding at school are a turn of the page away.

Political science Professor Thomas Klassen and humanities Professor Emeritus John Dwyer lay out the secrets to success for university students in their new book, How to Succeed at University (And Get a Great Job!): Mastering the Critical Skills You Need for School, Work and Life.

Their book is aimed at students of all kinds – those entering university straight from high school, mature students returning to school years later and everyone in between. Moreover, it is an ideal resource for anyone concerned with student success, including parents, teachers and counsellors.

“For students who decide to pursue a university education, the years spent on campus are the best training for the rest of life,” says Klassen. “The skills learned in the classroom – communication, problem solving, teamwork and adaptability – are critical to flourishing in the ‘real world.’  In the book, we show how to be smart and strategic about preparing for the job market and translating the skills learned at university into something sought-after after graduation.”

In the book, the authors not only tell students what to do, but show them. Real-world examples and strategies are used to combat the disconnect students feel between the classroom and the outside world. In the chapter titled “University as Preparation for a Great Job,” Klassen and Dwyer break down how to select courses and what job-related skills can be learned from class. When he was a university student, Dwyer says he wishes he had known “how absolutely exciting and life-changing studying with great scholars and teachers could be.

“It was three-and-a-half years before that dawned on me,” Dwyer says. “I initially saw university as an ordeal to be gotten through. When I learned what really counted, everything changed for me.”

Klassen adds that enrolling in the courses for which a student has passion is the best way to ensure success at school and in the workplace.

The book provides practical advice for mastering the day-to-day tasks of being a student, including writing assignments such as essays, lab reports and exams. The authors then focus on developing research strategies and critical skills, which can take students from the classroom to the boardroom and beyond.

With their insider perspective, the authors give tips on preparing for exams, answering multiple-choice questions, running short of time on tests and managing stress. They show that writing an A essay is a process that follows a small number of steps. Klassen and Dwyer also reveal how to avoid the most common mistakes in school work. For example, many students unintentionally sabotage their essays by failing to write a proper conclusion, and there is a simple strategy to avoid doing so.

This book’s usefulness doesn’t end at graduation. The chapter “Finding and Getting the Great Job” outlines the art of getting hired, from the importance of networking to conquering job interviews. In the last chapter, “Success at Work and Beyond,” the authors address transitioning into that first post-graduation job and planning for further success.

Dwyer says the book is also relevant to non-university students.

“It’s the new reality that learning is lifelong,” he says. “Moreover, learning has never been exclusive to university. Learning in any situation is a set of attitudes, aptitudes and strategies that can apply to all routes. It is fascinating to me that the book speaks to the parents of students, many of whom never went to university.”

An entire chapter is devoted to managing social media, including how individuals can brand themselves and how to use social media to build relationships. The authors use Internet dating as a metaphor for finding a good match between a potential employee and employer.

“To our knowledge, the chapter about social media – email, Facebook and more – is unique to the book,” says Klassen. “Like any other tool, people need to learn how to best use and manage social media, and how to use it to their advantage, especially at school and when looking for a great job.” A recent York University study reinforced the importance of a job seeker’s online presence in being hired.

How to Succeed at University (And Get a Great Job!) is available in stores, including the York University Bookstore, and from online retailers. Electronic copies are available for free on the publisher’s website.