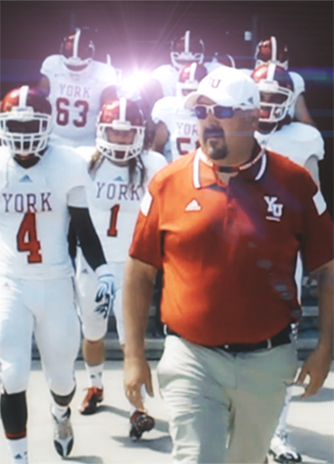 The award-winning web documentary series that follows the York U Lions football team returns Aug. 27 for its second season

A documentary series following the York Lions football team, from training camp to games, will return for a second season this fall following its success in 2014.

The series, 3rd and Goal, gives fans an all-access look at what goes into building and fielding a Canadian Interuniversity Sport (CIS) football team.

The first episode of the web-based documentary’s second season will air on Thursday, Aug. 27.

Created and directed by Mike Tassone, a graduate of the film program at York U and a former Lions football player (2010-11), 3rd and Goal was designed to “get people excited about York football.”

“We wanted everyone else to feel that excitement of the football season and get people on board with what we’re doing both on and off the field,” said Tassone.

It’s also a way to bring Lions football to fans and audiences who aren’t in the stands.

“Unfortunately, we play in a league that gets zero coverage from any mainstream media,” said Tassone. “Now, with the power of the Internet and social media, these guys can show their friends and families what they’re doing, and connect them a little better to the school and the team.”

In filming the series, Tassone takes a cinematic approach – from the look and colouring of the footage, to the types of shots, to the soundtrack, he works to portray a feeling of intensity and grittiness. He calls his style “gut punch.”

“We were the first ones in the CIS to do something like this, and it was very well-received.”

The 2014 series began as a four-episode season programmed to follow training camp and the first two weeks of the playing season; however, its success prompted two more episodes – a season finale and a special episode in February of this year that documented recruits signing with the team.

“This year we are doing the same kind of behind-the-scenes footage, but changing up the format a bit,” said Fisher. “We have five episodes scheduled … and they correspond with our biggest events and games on the schedule this year.”

It’s an exciting time for the football program, with an impressive recruiting class – ranked No. 8 by Canada Football Chat – heading to campus later this month for the 2015 season.

As well as giving fans a deeper look into the Lions, the documentary also gives coaches another tool in the recruiting process.

Recruiting is one of the most important things the coaches do, said Fisher, and showing episodes of the series was one of the key parts of all recruit visits this past off-season.

“I also know some of the new guys coming in are excited they will get to be a part of something so cool,” said Fisher.

A trailer for season 2 is now live at yorkulions.ca/sports/2014/8/21/FB_0821140520.aspx?path=football. To follow the series throughout the year, visit yorkulions.ca/3rdandgoal.