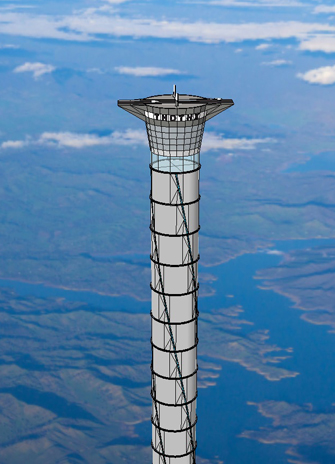 A concept illustration of the space elevator. Image: Thoth Technology

In the animated movie Toy Story, the frustrated toy astronaut Buzz Lightyear was known to repeat the phrase “To infinity and beyond!” before trying different ways to launch into space.

Back in the real world, a professor at York University’s Lassonde School of Engineering is putting some teeth into Lightyear’s motto by successfully securing an American patent for an invention that has the potential to change the way we travel into space.

Lassonde Professor Ben Quine attracted global attention this week with the news that his company, Thoth Technology, has been granted the U.S. patent for the space elevator.

A space elevator is a free-standing tower reaching 20 kilometres above the Earth’s surface, more than 20 times the height of the world’s tallest structures. It would have the potential to launch satellites and space transport vehicles carrying astronauts and payloads into orbit around the Earth. Quine imagines that his invention could also be used for wind energy generation using turbines, could serve as a communications tower and could dramatically alter the space tourism industry.

One of the most difficult aspects of launching conventional rockets and transportation vehicles into space is the danger associated with leaving gravity behind. The key advantage of the space elevator is its height, reaching into low Earth orbit where the impact of gravity is much less. The tower would sit in the stratosphere below the area where satellites fly. It could play a critical role in reducing the time, cost and risk associated with launching payloads and astronauts from the Earth’s surface.

Constructed from Kevlar, the structure would use pneumatically inflated sections, pressurized with lightweight gas such as hydrogen or helium, to actively stabilize itself and allow for flexibility. A series of platforms or pods, supported by the elevator, would be used to launch satellites, spacecraft and payloads into the Earth’s orbit.

The technology offers an exciting new way to access space using completely reusable hardware, said Quine, who estimates that it would save more than 30 per cent of the fuel required for a conventional rocket.

“Astronauts will ascend to 20 kilometres by electrical elevator,” said Quine, who is the inventor of the space elevator. “From the top of the tower, space planes will launch in a single stage to orbit, returning to the top of the tower for refuelling and reflight.”

Quine is an associate professor of space engineering at Lassonde and the chief technology officer at Pembroke-based Thoth Technology. A seven-metre model of his invention has been showcased at York’s Keele campus.

Thoth President and CEO Caroline Roberts believes the space tower, coupled with self-landing rocket technologies being developed by others, will herald a new era of space transportation.

“Landing on a barge at sea level is a great demonstration, but landing at 12 miles above sea level will make space flight more like taking a passenger jet,” she said.

Working with Quine to develop the technology are Lassonde space engineering grads Catherine Tsouvaltsidis, head of research and development at Thoth, and Ian Tomaszewski, a space systems specialist at Thoth.

The news of Thoth Technology’s patent has been featured in numerous media outlets across the world, including the Guardian and Telegraph newspapers, NBC News, CNBC, the Globe and Mail, the National Post, the Toronto Star and CBC News.

For more information, follow the link for U.S. Patent 9085897  “Space Elevator” at uspto.gov/web/patents/patog/week29/OG/patent.html. To access the patent information, enter the number 9085897 and click on “full text.”

By Jenny Pitt-Clark, YFile editor, with files from Thoth Technology and the Lassonde School of Engineering