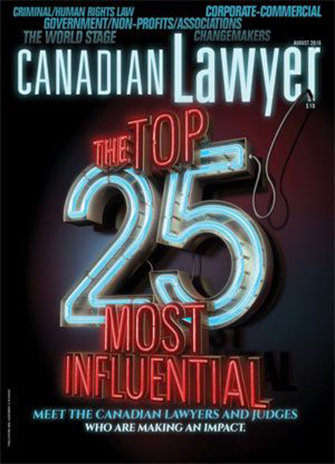 Lawyers coming from York University’s Osgoode Hall Law School make up more than a quarter of the Top 25 Most Influential listed in Canadian Lawyer magazine.

The list, which is now in its sixth year, recognizes lawyers of influence and is split into five categories: government, associations and non-profits — including courts, public inquiries and officers of Parliament; changemakers; criminal and human rights law; the world stage; and corporate-commercial law.

“Inclusion in the Top 25 talks to a level of respect, the ability to influence public opinion, and to help shape the laws of this country and others; contribution to the strength and quality of legal services; involvement and impact within the justice community; and social and political influence and involvement,” writes Gail J. Cohen, editor-in-chief of Canadian Lawyer magazine, in her introduction to the list.

This year’s list vetted 135 nominations through an internal panel, public voting and finally the magazine’s editorial board.

“We aim to select lawyers who have been influential within the profession as well as society over the last year and a half – both at home and beyond Canada’s borders,” writes Cohen.

Here’s a look at this year’s recipients out of Osgoode Hall Law School:

Poonam Puri (in the category of corporate-commercial law) is a professor of law at Osgoode, and was appointed to the faculty in 1997. She is one of Canada’s most respected scholars and commentators on issues of corporate governance, corporate law, securities law and financial regulation. She has advised public and private company boards of directors and has acted as an independent expert on significant securities litigation cases and class action matters. She has directed research programs, and was recently appointed as the expert adviser for the Credit Unions’ legislative framework review by Ontario Minister of Finance Charles Sousa.

Sara Cohen (in the category of changemakers) is the founder of Fertility Law Canada at D2Law LLP in Toronto, and is an adjunct professor at Osgoode where she teaches reproductive law. Her career has put a spotlight on reproductive law, and her expertise is in demand across Canada and internationally. Cohen is also recognized for her lobbying efforts, including pushing for the Ontario government to cover in vitro fertilization through the provincial health plan.

Mark Tamminga (in the category of changemakers) is a partner at Gowling Lafleur Henderson LLP in Hamilton, where in 2012 he took on the role of leader, innovation initiatives. He was recognized in this list in particular for his work in automating legal practices, an interest that sparked in 1986 while he was still a law student. He has successfully automated the Gowlings Recovery Services practice, and is behind the design and build of a number of different legal software successes.

Rocco Galati (in the category of criminal/human rights law), who leads Rocco Galati Law Firm PC out of Toronto, returns to the list for a second time. Galati is known for his passion to challenge the government and hold it accountable to the law. He challenged Stephen Harper’s appointment of Justice Marc Nadon to the Supreme Court of Canada, and won. Recently, Galati was elected to the Law Society of Upper Canada as a bencher.

Marie Henein (in the category of criminal/human rights law) is a senior partner at Henein Hutchison LLP in Toronto. She has been put in the spotlight for representing high-profile clients such as former CBC radio host Jian Ghomeshi and former Ontario attorney general Michael Bryant. She has experience in regulatory, criminal and quasi-criminal litigation, and has an excellent track record of success in the court. This is her second time appearing on the list.

Lorne Waldman (in the category of criminal/human rights law) is the founder of Waldman & Associates in Toronto, and has become an expert in immigration and refugee law since opening his practice in 1979. He has argued cases at all levels of court, including the Supreme Court of Canada. Waldman is also involved on the international stage, and represents Mohamed Fahmy, the Canadian journalist who works for Al Jazeera.

Dawn Devoe (in the category of the world stage) serves as general counsel for World Vision Canada in Toronto. She is the key adviser for its No Child for Sale campaign. Devoe has represented World Vision Canada at global partnership meetings, and is lead counsel for the Canadian negotiations of World Visions partnership with the United Nations World Food Programme. She has an extensive legal career in the corporate sector, including work in the oil and gas industry.