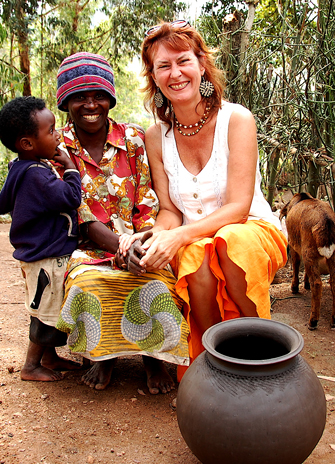 York University theatre Faculty and alumni team up in the production of film Professor and Governor General’s Award-winning playwright Colleen Wagner’s new play, The Living. It is one of 16 plays selected for Toronto’s juried SummerWorks Performance Festival. The popular festival is crammed with theatre, dance, music and live art. It started last Friday and continues to Aug. 16.

“Based on true stories from Colleen’s travels to Uganda, South Africa, Ghana and Rwanda, The Living is an important play about impossible love and transformative justice,” said York Theatre Professor Ines Buchli, director of the show.

Leading up to opening, Now Magazine’s Jon Kaplan listed Wagner as one of the five artists to watch at SummerWorks. Now gave the show a four “N” ranking and MooneyonTheatre.com called it “riveting.”

The Living is a documentary play, dramatizing the experiences of genocide survivors in post-conflict zones. It utilizes the stories of women and girls who live side by side in government-issued housing with men who have served prison terms for war crimes committed against them, many of them undergoing NGO-funded campaigns to encourage reconciliation. The Living examines human nature at its most visceral, in hope that the sometimes impossible acts of love, compassion and understanding can transform old grudges and simmering hatred.

Wagner has been travelling in Africa since 2006. Her Governor General’s Award-winning play The Monument premiered in Rwanda in 2008, and although it was written in 1993 after her travels to Southeast Asia, Rwandans approached her thinking she had been in Rwanda during the genocidal slaughter of Tutsis and had written the play in response to what she had witnessed.

“The Rwandan people told me the play was theirs,” Wagner said. “Women would approach me and tell me they wanted to tell me their story of survival. They knew the world knew of the genocide, but not their own personal story. They asked me to tell their stories, most of which were harrowing. I found the women heroic. I wondered if I could ever be as brave.”

In 2009, she received funding from the Social Sciences & Humanities Research Council of Canada for her research project “Theatre of the Wounded” (see the July 31, 2009, YFile story) and she continued to collect stories from women and girls who survived trauma in conflict zones in Africa to write a female-centred heroic myth based on their experience and their remarkable efforts to rebuild and move on. The Living is a direct result of the research project, which also resulted in an interactive website and a documentary which will be available online next year.

“It is amazing to collaborate with my colleagues off campus,” said Buchli. “Our years of working together has enabled a particularly direct communication and receptiveness to feedback, and our collaboration is richer and more effective as a result of it.”

Buchli also taught many of the cast, and they come into the play with a strong foundation of trust and respect that has accelerated the rehearsal process and facilitated an in-depth exploration of the text. Alumni Miriam Fernandes (BFA ’11), Richard Lee (BFA ’00), Beryl Bain (BFA ’05), Stephanie Jung (BFA ’07), Cindy Block (MFA ’99), Anita La Selva (MFA ’11) and Gabrielle Graham (BFA ’15) are joined by former students Kaleb Alexander, Francoise Balthazar and Wayne Ward.

“We are all profoundly transformed by working on this show,” said Buchli. “I have piles of books about genocide on my dining room table. Every day we come to rehearsal with news clippings from Somalia, Myanmar and Iraq. If nothing else, this show will have profoundly transformed the 20-person team working on it and increased our understanding of the personal impacts of horrors of war and the amazing resilience of the communities that must rebuild afterwards.

“But it is my hope that the audience takes away this notion that transformative justice is real. That people can move forward despite overwhelming challenges without the pressure to forget or to forgive things that are essentially unforgettable and unforgivable.”

The Living will be at The Theatre Centre – BMO Incubator for Live Arts (1115 Queen St. W.) with a varied schedule until Aug. 16. The schedule and tickets are available online.