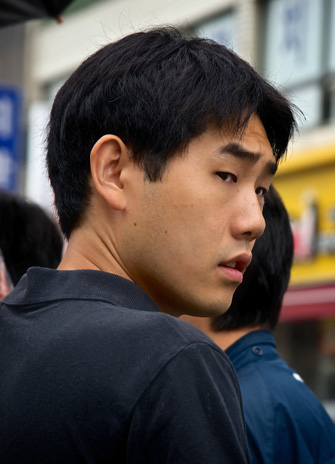 Albert Shin director image for In Her Place Featured image

Since its premiere at the 2014 Toronto International Film Festival (TIFF), In Her Place, the sophomore feature film from York University Film alumnus Albert Shin (BFA ’06), has been riding a wave of critical acclaim, international accolades and audience applause.

Shot on location in South Korea (Shin is a second-generation Korean Canadian), the film explores the complex dynamics surrounding the pressure to have children and attitudes toward adoption. Written and directed by Shin, the story follows an affluent city woman who arrives at a desolate South Korean farm where a pregnant teen and her mother have agreed to let her secretly adopt the girl’s unborn child.

On July 31, Shin screened the film at the Los Angeles County Museum of Art (LACMA) as part of its Film Independent series. The series is part of the museum’s first collaboration with TIFF, a partnership that connects Hollywood North with Hollywood.

In Her Place was released theatrically in Toronto in February 2015. It toured nationally earlier this year in TIFF’s Canada’s Top Ten Film Festival, with stops in Toronto, Vancouver, Edmonton, Calgary, Winnipeg and Montreal. This recognition, alongside Canadian film luminaries such as David Cronenberg and Xavier Dolan, has been one of the filmmaker’s self-described “biggest honours.”

When the film had its first screening outside of Canada at the San Sebastian International Film Festival, the three main actresses flew in from Korea to see the film for the first time.

“We got a huge standing ovation at the end, which was exhilarating and also a huge relief,” Shin said. “For the next several days after the screening, we were constantly getting stopped in the streets of San Sebastian by people who wanted to share their enthusiasm for the film, talk to us about it and ask questions. Having engaged audiences is the reason why I make films, so that was very memorable.”

Shin was awarded the Toronto Film Critics Association’s Scotiabank 2014 Jay Scott Prize. This is the second consecutive year the honour (which comes with a $5,000 cheque) has been bestowed on a York University grad – filmmaker Matt Johnson (BFA ’06), who also enjoyed TIFF and international film festival success for The Dirties (see YFile Oct. 2, 2013), was the 2013 recipient. The Toronto Film Critics also recognized current York University master’s candidate in film Eui Yong Zong for the 2014 Manulife Financial Student Film Award for his dramatic short Leftover.

In Her Place received seven Canadian Screen Award nominations, including for best picture, directing and screenplay.

Shin admits to some surprise over the momentum of the film. “This was a tiny little film I made in Korea, totally under the radar,” said Shin. “For audiences to have embraced the film the way they have, particularly at home in Canada, I’d be lying if I said I expected this.”

The filmmaker has a deep appreciation for the foundation of film education and experience he received at York University.

“I wouldn’t be the filmmaker I am today without my time at York,” said Shin. “Not just because I had professors and fellow students that were essential to my growth and many people I still work with today, but also because it gave me a great balance of theoretical and practical training that I think made me a more well-rounded filmmaker.”