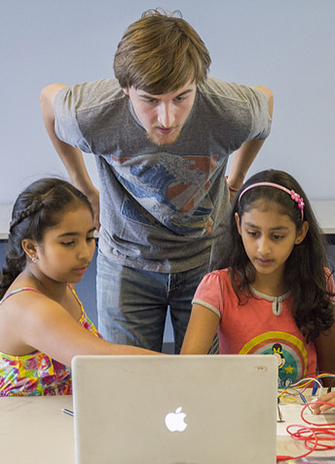 Youth aged 9 to 12 had the opportunity to experiment with video games and circuitry, and build interactive game components while learning about electronics and video game coding.

This was the second year for the Summer Inventors Workshop, which launched in 2014 with six 90-minute sessions at various Brampton Library branches. This year, the program continued to build on its success and expanded into Richmond Hill with four two-hour sessions at the Central Library. The 2015 workshops ran through the month of July.

The workshop program was designed under the supervision of Digital Media Professor Don Sinclair, and originally co-developed and managed by York U grad Nichie Enriques (BA ’15) and fourth-year student Michael Stuart (who returned for the 2015 instalment). The program was devised ­to engage youth in electronics and encourage creativity.

The original workshop includes a presentation about basic circuitry, followed by participants drawing a controller as a team and playing the video game together.

For the workshop, Digital Media students developed an original video game to be played with a controller that would be made by workshop participants using paper, a pencil and an innovative ‘gizmo’ called a MaKey MaKey.

This tool has the capability to turn almost anything into a ‘key’ and plugs into a computer using a USB port. Using alligator clip wires, conductors (such as fruit, coins, people, buckets of water) are connected to resisters on the MaKey MaKey. This connection then corresponds with a keyboard, which functions as a controller.

MaKey MaKey was developed by former MIT Media Lab students Jay Silver and Eric Rosenbaum and launched through a crowdfunding campaign on Kickstarter. MaKey MaKey is an academic and artistic project intended to unleash creativity and make anyone an inventor.

“The kids were like sponges,” said Stuart. “Niche and I were amazed how intuitively they understood circuitry.

“One of my favourite parts of the workshops last year was watching the youth design their controllers. One group, the youngest participants we met, came up with the original solution of drawing all four of the buttons on a separate piece of paper so they could each draw at the same time. We thought it was such a good idea we that we copied it for the rest of the workshops.”

Stuart and his 2015 program partner William Cook were able to add new elements to the Richmond Hill program due to the longer sessions. The pair created a new game, using Unity Software, that workshop participants could use to edit code and design their own variation of the game.

“This is a great way to introduce young people to the code and basic game mechanics that exist behind the glossy exterior of the games they are most likely playing every day,” said Cook. “Unity is a simple development software that is easy to jump into, but can also be used to create hugely sophisticated games.”

Stuart and Cook have been documenting their progress in a Tumblr blog called Eureka! Summer Inventors Workshop.