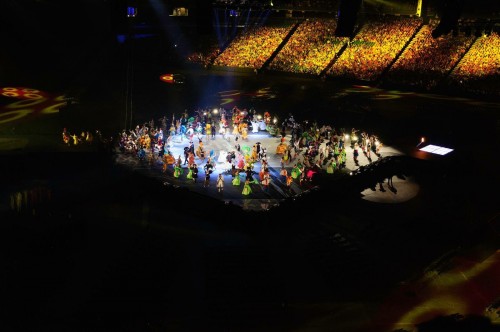 York University student Nicole Taylor wasn’t in class during the opening ceremonies of the Toronto 2015 Pan Am Games – but she was on stage.

The third-year mature student, who is pursuing her second degree at York U, performed with her dance troupe Dance Caribe in the July 10 event at the Rogers Centre. The performance featured traditional Afro-Caribbean costumes and movements, and was choreographed by Cirque du Soleil.

The Pan Am opening ceremonies was the largest event produced by Cirque du Soleil to date.

Taylor, who has been dancing since age seven and with Dance Caribe for the last year, said the experience was exciting.

“This was the biggest thing I have ever done,” she said. “I loved participating in something like this. It was extraordinary.”

Dance Caribe was asked to audition for the opening ceremonies after Cirque du Soleil watched the dance company’s 25th anniversary performance in October 2014.

“They asked us to be part of the opening ceremony, so from there we had to audition and show them a few of our,” said Taylor. “They liked one of four original pieces called Afrozo, and they picked out some of the dances moves that they thought would work with their choreography, so it was essentially a mix of our dance moves, Afro-Caribbean dance, with their instructions.”

The event was organized in different sections, with Dance Caribe performing as part of the Powwow group in the Carnival section – a segment dedicated to showcasing Toronto’s broad cultural and ethnic diversity. The troupe was included in both the beginning and ending of the ceremony.

“We didn’t know the extent of the entire show, we just knew our part which was 10 minutes of the opening ceremony and then we were to come back for the end,” said Taylor. “The whole thing was surprise, and Cirque du Solei is not just good at surprising the viewers, but also the people that participate in the event. I had no idea the magnitude of it all.”

Apart from dancing, Taylor also works and attends York University. She previously completed an English degree at the University, and is now working toward a degree in communications.

The inspiration to earn a second degree, she said, came after an internship in online social media and journalism. She sees herself pursuing a career in the publishing industry.

She also said she plans to continue dancing in her spare time.

Her interest in dance began in her early years when her parents enrolled her to help connect her with Caribbean culture. It was also a way for Taylor – a shy child – to make new friends and build self-confidence.

Now, she says she feels the most confident when she’s on stage.

And despite her commitments to work and school, she continues to balance her responsibilities to find time for dance.

“If dance is important to you, you have to make time to make it happen,” she said.

During the lead up to the Pan Am opening ceremonies, she spent several hours a week in rehearsals that ran for months.

“I love dancing,” she said. “We were all humbled and excited to be a part of it and in the end it was a lot of work, but it paid off.”

With the ceremonies now behind her, Taylor might slow down but says she will always make time for dance.