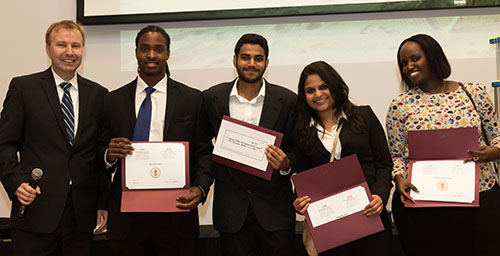 A team of students from the Lassonde School of Engineering at York University won first place in the 2015 National Design Competition hosted by the Canadian Society for Mechanical Engineering (CSME). This year’s design challenge was to engineer, build and assemble a 3D printer with a fixed budget of $300. The awards were given out at the CANCAM conference on June 1 in London, Ont.

The Lassonde team excelled this year with a creative design that was both technically ingenious and business sound, while built from basic components on a small budget.

“Successfully building a printer that can print other [not space-related] components has not only increased my knowledge and interest in anything mechanical, but my personal confidence as a student engineer has grown significantly as well,” says Alex Boucaud, team lead and fourth-year space engineering student at Lassonde.

The annual competition hosted by CSME encourages students to demonstrate creativity and innovation while showcasing their business development skills and grasp of design principles. Despite the fixed budget, Lassonde students produced a high quality and low cost, functioning 3D printer. The same 3D printer also won a top prize at Lassonde’s Capstone engineering competition for the “Most Commercial Project.”

“The winning team demonstrated that it takes a true Renaissance Engineer to succeed in the creation of an effective commercial design, even when faced with limited resources,” says Professor Aleksander Czekanski, Lassonde’s NSERC/Quanser Chair in Engineering Design for Innovation.