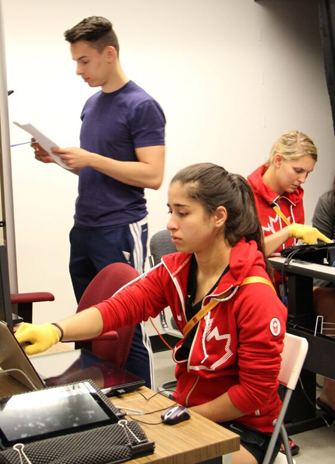 Members of the women’s handball team participate in a series of tests to determine how, as elite athletes, their brains process information and the resulting actions

Just days ahead of their preliminaries at the Toronto 2015 Pan Am/Parapan Am Games, Canadian men’s and women’s handball teams dropped by York University to test their hand-eye coordination and contribute to ongoing research in the Faculty of Health.

The testing was conducted by School of Kinesiology and Health Science Professor Lauren Sergio and her team of researchers. The results from the tests will be used to study how the brain processes thoughts and the resulting actions.

“The Games are a great opportunity for us to test athletes for our research studying coordination in elite versus non-elite athletes at different ages, and brain differences in motor control between males and females,” says Sergio.

In a little bit of healthy pre-Games competition, it appears that the women’s team has an edge over the men’s team. “The women are better at the tests that use both hands in the hand-eye coordination tasks because their two brain halves communicate more quickly than the men,” says Sergio.

Sergio’s research team collected the results of the tests anonymously completed by more than two dozen athletes, which will be added to the data collected from other major sports teams.

Sergio has studied the neural control of movement since 1988. Her research projects examine the effects of age, sex, neurological disease, head injury and experience (elite versus non-elite athletes) on the brain’s control of complex movement. Sergio works with a wide range of adult populations, including NHL draft prospects and Alzheimer’s disease patients, using behavioural and brain imaging techniques.

Sergio is also a member of the Centre for Vision Research.

BrDI cognitive-motor integration test
This simple test takes eight to 12 minutes and involves sliding a finger across the touch screen of a tablet running custom software. In the first part of the test, the athlete slides a finger to a target on the screen. They then must move a cursor to the same target, this time with an altered feedback where up=down and right=left.

Automated tinetti test
This stability test takes about five minutes and involves four different gait/posture movements including walking, turning in place, sitting down, and standing up in front of a video system running Microsoft Kinect technology.

Perturbing-field slalom task
In this five-minute task, participants grasp a stylus on the end of a robotic arm and try to navigate a cursor around virtual pylons on a computer screen. This task is designed to measure the participant’s ability to make fast, smooth movements and to adjust to the irregular movements in visually-guided whole arm tasks. Movement “smoothness” and swift reaction to perturbation are qualities that often distinguish more skilled athletes from less skilled athletes, which this task quantifies.

Whole-hand bimanual coordination test
In this one-minute test, participants stand with the tool in front of them at waist height. They then hit an uncovered near-right button with their right hand while lifting a leftward hinge with their left hand, and use their right hand to press a button underneath. This action is repeated but with left hand pressing a near-left button, the right hand lifting the right hinge, and the left hand pressing the button underneath. They continue in this sequence for a total of 12 times, indicated by lights along the bottom of the board.