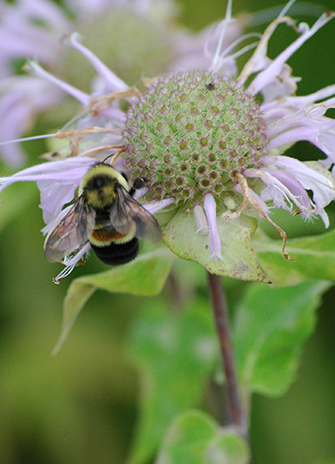 Bumblebees are rapidly declining in both North America and Europe, and a new study points to climate change as the major factor. The study, a comprehensive analysis of how climate change affects these critical pollinators, was published in the journal Science.

The research shows that bumblebees are losing large amounts of the southern portion of their ranges, but unlike other species which are compensating by moving further north as the climate warms, bumblebees are not heading north. Their range areas are compressing with rapid warming and this is causing a significant reduction in their populations.

“One of the important things to me was how many species are being impacted by climate change. That was a bit of a surprise,” says York University Professor Laurence Packer, an expert on bees and a co-author on the study with lead author Jeremy Kerr (PhD ’99) of the University of Ottawa. “I’d suspected some may be declining, but not such a large proportion. The fact that at the northern edges of their ranges they are not moving north as the climate changes is actually really quite worrying.”

Packer insists this kind of research would be impossible without access to vast collections of curated specimens in museums, as well as in labs such as his (the Packer Lab at York U), which holds hundreds of thousands of bees. “Museums hold the basic biological information that tells us about the history of our impact on the world. They also contain the specimens that everything ultimately has to be compared to in order for identifications to be reliable,” he says. For this study, “Climate change impacts on bumblebees converge across continents,” researchers looked at museum records of 67 species of bumblebees in North America and Europe over the past 110 years.

“For the North American species that I work on, we know that about a third of them are in decline and in some cases this has been quite dramatically, more than 90 per cent,” says co-author Sheila Colla (PhD ’13), an environmental studies professor at York University.

Historically, many species of bumblebees were quite common, including the rusty-patched bumblebee, which was the fourth most common species in southern Ontario in the ’70s and early ’80s, says Colla. She has only seen two in 10 years despite extensive searching throughout its range in Canada and the United States. “That’s an indication that there’s something going on with some species of bumblebees throughout their large ranges, even for species which historically had been doing quite well,” she says.

“One of the scariest parts of the work that I’ve done is just realizing how quickly the situation is changing. The bumblebees that are in decline were doing fine 50 years ago. We’re talking about large changes in community composition of essential pollinators over just a few decades.” That means adults today were seeing species as children that are no longer there. Their own children won’t have the opportunity to see them at all.