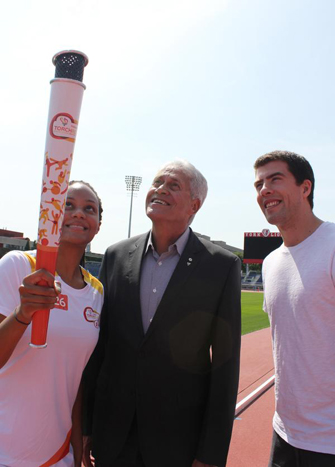 Wednesday could only be described as a memory maker for York Faculty of Health student and Lions sprinter Sheereen Harris.

Harris, who is studying kinesiology, participated in the Toronto 2015 Pan Am Games Torch Relay and carried the Pan Am flame into the new CIBC Pan Am/Parapan Am Athletics Stadium on the Keele campus. She was accompanied by York University President and Vice-Chancellor Mamdouh Shoukri and her teammate David McKay, who is a Lions pole vaulter and a Faculty of Environmental Studies student.

The Toronto 2015 Pan Am Games Torch Relay is winding up a 41-day journey that brought the Pan Am spirit to more than 130 communities. Deeply rooted in history and tradition, the Pan Am flame was lit in May 2015 during a traditional ceremony in Teotihuacan, Mexico, before it arrived in Canada.

The torch relay started in Canada on May 30 and will make its final stop on July 10 at the Opening Ceremony of the Toronto 2015 Pan Am Games.

Harris, escorted by McKay and Shoukri, brought the flame into the newly built, fully accessible CIBC Pan Am/Parapan Am Athletics Stadium, which is set to house 21 track & field events and offer seating for 12,500 spectators. While neither student is competing in the Games, both have plans to cheer on Lions sprinter Khamica Bingham and York Faculty of Health grads Dontae Richards-Kwok (BA ’15) and Daniel Novia (BA ’14). Richards-Kwok is a sprinter and Novia is competing as a thrower in the Pan Am track & field competition.

York University will welcome thousands of athletes from 41 countries in the Americas and the Caribbean this summer. Canada has had the honour of hosting the games twice in the past, but it’s a first for Toronto this year, and a first here at York U. The Pan Am and Parapan Am Games are the world’s third largest international multi-sport games, held every four years immediately before the Olympic and Paralympic Summer Games.

In addition to hosting the track & field portion of the games, York University will also host the tennis competition in the Aviva Centre (Canadian Tennis Centre).