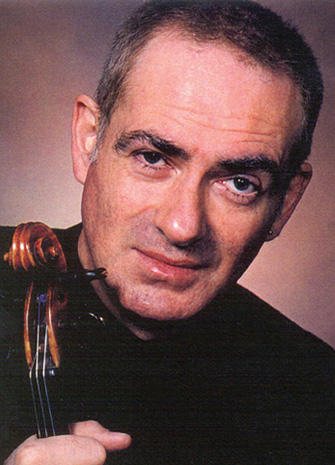 Internationally renowned violinist Jacques Israelievitch, a music professor in York University’s School of the Arts, Media, Performance & Design, has been named a member of the Order of Canada.

The honour, announced by Governor General David Johnston on July 1, recognizes Israelievitch’s outstanding contributions to music as a performer, educator and champion of Canadian musical creation.

Israelievitch was among the 100 new appointments, including 87 new members, 11 officers and two companions, who will be officially invested into the Order of Canada at a future ceremony to be held at Rideau Hall in Ottawa.

“It’s a great honour to be recognized alongside so many admirable people by the country I have chosen as my home,” said Israelievitch. “Making music and teaching are my passions and raisons d’être. I’m completely fulfilled by all this. If my career is like a wonderful cake, receiving the Order of Canada is the cherry on top.”

Israelievitch is equally at home in orchestral and chamber settings. He served as concertmaster of the Toronto Symphony Orchestra for an unprecedented two decades (1988 to 2008) and has appeared with many other leading orchestras from around the world under the baton of eminent conductors including Sir Georg Solti, Carlo Maria Giulini, Leonard Slatkin, Raymond Leppard, Sir Andrew Davis and Raphael Frühbeck de Burgos. As a chamber musician he has performed with such luminaries as Emanuel Ax, Yefim Bronfman and Yo-Yo Ma. He was a founding member of the Toronto Symphony Quartet and appeared for many seasons with the Naumburg Award-winning New Arts Trio at the Chautauqua Institution in New York State. With his son, percussionist Michael Israelievitch, he formed the Israelievitch Duo, which has commissioned and premiered works by such distinguished Canadian composers as Michael Colgrass, Srul Irving Glick and Murray Adaskin.

Israelievitch’s discography of more than 100 albums includes the Juno-nominated Suite Hebraique with pianist John Greer; Tchaikovsky: The Ballets with the St. Louis Symphony; Beethoven’s  Romances with the TSO; and the chamber recordings Suite Française, Suite Enfantine, Suite Fantaisie, Solo Suite, and Hammer and Bow. In 2006, he broke new ground by releasing the first complete recording of Kreutzer’s 42 Studies for solo violin.

Since joining the teaching faculty at York in 2008, Israelievitch has frequently shared the concert stage with his music department colleague, pianist Christina Petrowska Quilico. Last month, he launched a new collaboration with Petrowska Quilico: the recording Fancies and Interludes. Recorded live on campus and released on the Centrediscs label, the disc is a collection of four 20th-century works by established Canadian composers. The pair performed at the Canadian Music Centre for the CD launch event on June 11.

Israelievitch is an officer of the prestigious Order of Arts and Letters of his native France. In 2008 he received a Lifetime Achievement Award from the Toronto Musicians’ Association in recognition of his distinguished contribution to the performing arts in Canada.

“Jacques’ contributions to Canadian music, as both a performer and teacher, are truly outstanding, and we’re very proud of his accomplishments and of his affiliation with York,” said Professor William Thomas, chair of the Department of Music. “Jacques’ students in our program have benefited greatly from his wisdom and experience, as have his professional colleagues. He is a remarkable example of a performer truly dedicated to his art.”

“Jacques is a remarkable member of our academic community and we are so pleased to see him recognized with the Order of Canada,” said Shawn Brixey, dean of the School of the Arts, Media, Performance & Design. “We extend warmest congratulations to Jacques on this signal honour. His gifts and achievements as a musician and educator, and his collaborative spirit in sharing them with us, are an inspiration to us all.”

The Order of Canada is one of this country’s highest civilian honours. It recognizes outstanding achievement, dedication to the community and service to the nation. To date, more than 6,000 people in all sectors of Canadian society have been invested into the order.