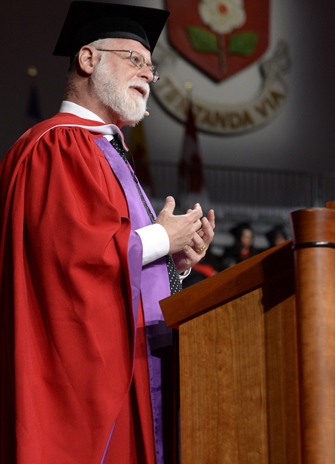 Alberto Manguel is an internationally acclaimed anthologist, translator, essayist, novelist and editor. He has authored several award-winning nonfiction books, including A History of Reading, The Dictionary of Imaginary Places, Curiosity and novels such as News from a Foreign Country Came and All Men are Liars. He moved from Argentina to Toronto in the 1980s and taught literary courses at York University before concentrating on his own writing. He has been named commander of the order of arts and letters in France, and is a Fellow of the Royal Society of Literature (UK), the Guggenheim Foundation (US) and the Argentinian Academy of Letters.

York University celebrated Manguel’s literary accomplishments with an honorary doctor of laws degree that was conferred during spring convocation ceremonies June 17 for the Faculty of Liberal Arts & Professional Studies. Manguel delivered his convocation address by offering a tour through his own mental library and concluded with a tribute to the power of forgiveness.

“The honorary doctorate that York University has seen fit to grant me is for me a very special honour indeed. York University holds a very important place in my memory,” said Manguel. “When I arrived in Canada in 1982, I knew nothing about this country except that Louise Dennys had her offices in a city called Toronto. This seemed to me to be a good omen, until then (I was 34 years old at the time) I had always worked either as a bookseller or as a publisher. Now looking for a place to start a new life as a writer, I decided that Canada seemed like a good place to try my luck.”

Once he had arrived Manguel said he was met with an unexpected and overwhelming generosity from all sorts of people. “The editors of Books in Canada and The Globe and Mail offered me book reviews to write,” he said. “CBC Radio suggested that I discuss my favourite readings with Peter Gzowski. Richard Rose and John Krizanc prompted me to try my hand at writing plays. And Professor Michael Creal, then chair of the Division of Humanities in the Faculty of Arts at York University, asked me if I would like to teach a course in fantastic literature.”

The accomplished author and essayist admitted to graduands that while he had published an anthology of fantastic short stories Black Water: The Book of Fantastic Literature, he had never taught before. “My only education was six years in a wonderful high school in Buenos Aires where talented professors showed us how to study merely out of a passion for something, a subject, an author, an idea, and to allow an imagination absolutely free range,” he said.

He had attempted to study at a university in Brazil but found the classes to be dull and gave up after two semesters. “So what authorized me to confront a room of inquisitive York students? Michael Creal gave me admirable advice; he told me that more important than the factual or theoretical information that I could give the students, which they could find in encyclopedias and scholarly books (this was before the days of the Internet) was a subject that I loved. The love and thrill of discovery of brave literature, remembering my own high school teachers and how they could make us feel that a medieval romance or the adventures of Don Quixote mirrored in some secret way our own fears and desires,” he said.

So he mustered his courage and began teaching. “Looking back, I think that the classes went quite well. I had the magical experience of seeing how my own readings elicited in the students often very different but equally valid responses and new, surprising revelations,” he said.

As he watched and the course progressed, he said that he could see the students begin to build their own love of literature. “I watched them begin to build their own mental libraries and furnish the shelves with imaginative material for future mental endeavours,” he said, describing his students as beachcombers coming across unsuspected treasures in unexpected places.

“I observed how they began to think like Plato, imagine like Borges, empathize like Virginia Wolfe and dream like Calvino. What I mean to say is that I watched them claim for themselves the universal library that is our common heritage as we are made too often to forget,” he said.

“Each new generation has only this to respond: We can’t forgive you but we can try to understand you and we can attempt to think for ourselves and imagine better ways to live. If we don’t succeed we can still say that we tried to the best of our abilities and with a more, or less, clear conscience to make the world a better place and maybe we, the old ones can learn from you and your attempts to imagine better,” said Manguel.

The lesson imparted by the Manguel, who is a masterful teacher and storyteller is that stories teach the reader that “every plot can have a surprise ending and even the most set in their ways characters can sometimes transform themselves.”

In the last chapters of our lives and stories, even those who are dying, can learn to do new things, said Manguel and the storyteller ended his address with a story.

“It is told that Socrates, condemned to drink a cup of poison by the courts of Athens, was discovered by a friend on his last afternoon sitting in his cell with reed flute in his hands. When the friend asked Socrates what he was doing, the old man answered that he had a few hours left before the time prescribed for his death and that he was learning to play the flute.”