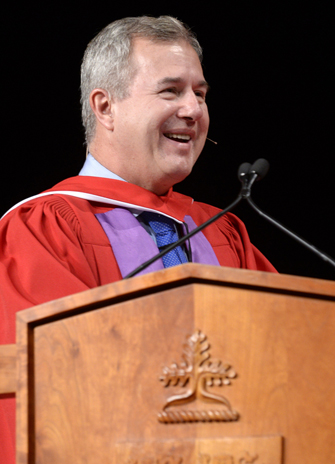 “Think big or go home” were five words that York University alumnus Tom Jenkins heard frequently from, and exchanged with, his classmates during his final year of his Master of Business Administration studies at York University.

Since those days some 30 years ago, he has indeed thought big.

Jenkins (MBA ’87), an entrepreneur, businessman, technology leader and the chair of tech giant Open Text, was awarded an honorary doctor of laws degree by York University during convocation ceremonies for the Schulich School of Business on June 19.

As chair of OpenText Corporation in Waterloo, Ont., Jenkins is currently a board member of Thomson Reuters Inc., Manulife Financial Corporation and TransAlta. He is the chair of the National Research Council of Canada and the Canadian Digital Media Network. He serves as honorary colonel of the Royal Highland Fusiliers of Canada and is the 10th chancellor of the University of Waterloo. He is also the founder of Communitech in Waterloo. In recognition of his extraordinary business success, York conferred the honour on Jenkins.

“I walked these halls some 30 years ago with my business classmates and talked bravely about how we were going to change the world. We were scared when we graduated but we never admitted it to anyone. I didn’t anyway,” Jenkins told graduands. “In my day, we were very happy to go to the library to do our research and analysis using two-year-old printed corporate annual reports. Can you imagine? Now, a teenager in Africa with a smartphone has access to more information that the President of the United States 15 years ago!”

Jenkins praised Schulich and its alumni corps. He highlighted how the school’s alumni had changed Canada and their impact on the world. He advised grads to remember that others had similar tools and equated it to being in a race. The key, he said, to pulling ahead of the pack is to remember five words. “Think Big or Go Home.”

“My class and those that had preceded me have gone on to do great things. Some have been bank CEOs, Telecom Presidents, international organizations, professors, some stayed home and had children and then started businesses later in life,” he said. “The bottom line for all of you – go for it! Think big or go home, because otherwise, what is the point of getting your degree in the first place?

“Do not play it safe – go for it. Do it now while you can. Soon enough you will have a spouse, children a dog and a cat and a mortgage,” he said. “Define your career right away. Seek out the experiences. Take chances! If you don’t do it now – when will you do it?”

He tempered his challenge with the observation that the best thing he received from York University was his best friend and partner in life, his wife Toby. “She was in my MBA and we met on a bus going on a ski trip with the class to Blue Mountain. I didn’t know how to ski and she spent the whole day teaching me,” he said with a laugh.

He then spoke about his family and the need to work while going to school. “My family did not have much money and so I had to work while I went to school to be able to pay for tuition. I got a job working for an auctioneer where I would hold up items being auctioned so that everyone could see it,” said Jenkins. “I watched people bid on everyday items such as tables and chairs and beds and toys and appliances. I watched people get caught up in the excitement or perhaps their ego and actually pay more for a used chair than what it cost brand new. I will always remember the bemused look on auctioneer’s face when that happened.

“At the time, I just thought of it as a job but what I didn’t realize was that I was observing human behaviour and later when I went into business, almost everything that I was engaged in from the stock market to mergers and acquisitions was actually one big auction,” he said. “What an advantage that job gave me! All of my education taught me about the nomenclature and the theories but nothing taught me more about people and why someone would actually pay more for a used chair than it was new. Later in my life that saved me millions of dollars.”

He told the Schulich grads that their generation is a generation of leaders that is very unique in that they would be called upon to define new ways of leading people at a higher level of global competition than has ever been experienced before. Their graduating class and the classes from two or three years earlier and those who follow represent the senior leadership for business in Canada and the decisions they make will set the standard for a generation to come.

Jenkins then mused about a common complaint of many parents about their children who appear not to remember anything and who also appear to be doing too many things at the same time, otherwise known as multitasking.

“Guess what? Those observations are correct and they are supported by research that has been done into their brains. In California, researchers have been conducting CAT scans of digital native brains, [the term digital native was coined and popularized by education consultant, Marc Prensky in his 2001 article Digital Natives, Digital Immigrants] and they have found that all three areas of the brain associated with memory function are greatly diminished while the area of the brain that ‘networks’ between the right and left hemispheres, the Corpus Callosum is in fact enlarged,” he said. “What does this mean for the future?

“After hundreds of thousands of years of brain development over tens of thousands of generations, in one generation we have made a massive impact on brain function. That is an acceleration like we have never seen before,” he said. “What is behind this? Well, it’s the impact of machines. Smartphones are just personal machines. The brain of a digital native is just efficiently handing over the memory function to a machine and concentrating on the integration of information rather than just the storage of data. This has a huge impact on how we train and lead our next generation as they are not like us. If we force them to memorize huge amounts of data as we did, we are just torturing them and soon they will quit and go to somewhere more suited for their abilities.”

The result is that innovation is creating machines that think and can replace humans, said Jenkins. “Remember Terminator? The Cyberdine Systems machine became self-aware and then destroyed humans in order to protect itself. Sound far fetched? Think about what happened in the financial industry five years ago. It had a ‘flash crash’. This happened one day when the nanosecond trading algorithms on bank computers decided that the market would turn down and they all started automatically selling. The problem with machines is that they operated much faster than we can. A nano second trade can make one billion trades within one second. Think about that, one billion trades for a human is the equivalent of 32 years. So a group of machines can do 32 years of trading before we humans are even aware of what they are doing.”

He challenged grads to think long and hard about how they were going to govern such rapid innovation. “We have to think big or go home because others will if we don’t,” he said.”The buck stops with you and you will be the generation that defines the way we lead the first ever generation of digital natives, how we interact with machines in a complex way and how we prepare our procedures to anticipate our needs in procurement during an ever changing pace of innovation.”