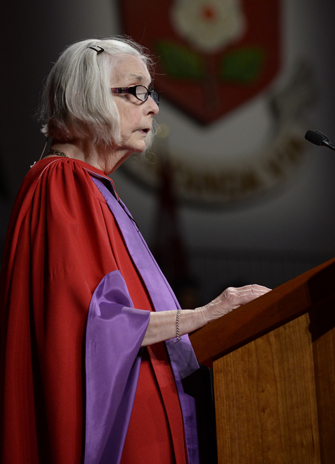 Hélène Comay, early childhood educator, pioneer, mentor, spoke about the power of play during her commencement address to graduates of the Faculty of Education during spring convocation ceremonies on June 18.

Born in Paris in 1926, her interest in this early childhood education began in the late 1940s in England after consulting with Anna Freud, daughter of Sigmund Freud, about a future in this area. Her contributions to Canadian society stem from her leadership of the JCC Preschool (formerly the YMHA) at Bloor and Spadina in Toronto. She has been involved in research projects at SickKids and the University of Toronto while training countless early childhood teachers.

As a teacher of young children for over 50 years, Comay told grads that she has watched some of her first students grow to be parents themselves and send their children to her school. “Over this time, the world has transformed in ways we could never have dreamed of, and we see profound changes in the lives of kids and their families,” she said. “Being a parent was never easy, but parents used to take it for granted that their children would learn whatever they needed to enter society as adults. And of course parents would show their children things and respond to their questions. Today, I think that our society has become much more competitive, much more anxious about the right thing to do with children. Parents are glutted with contradictory information. And what teachers see now are children who are extremely pressured. Their days are long, they are on the go from early morning to supper time.”

The early preschools were often called “play schools,” said Comay, noting that the main reason children went to school was to learn social skills, to expand their horizons and to have fun. And that is still a crucial part of early education, she said, because unless children learn to interact with other children, school (and life) will be difficult for them.

She expressed her concerns about the pressure young children experience today to do academic tasks. She told grads that she felt this doesn’t necessarily prepare them well for academic learning in later years. With less and less time to play, they acquire fewer of the skills they need to listen to each others’ ideas and express their own ideas, which would allow them, said Comay, to develop the understanding that makes academic skills meaningful. “Children become avid readers not by practicing letters but by hearing wonderful stories with rich language and interesting ideas, so they become hooked on books and are desperate to be able to read them on their own,” she noted.

“What worries me is that all this time on schoolwork actually interrupts what children need to be working on, which are the emotional and social ideas that matter most to them. Children are deeply curious, they are deep thinkers, and they are intrepid explorers. They are intent observers and listeners,” she said.

She illustrated her point with an anecdote.

“One day I got a phone call from a mother of one of the children at my school. She was telling me that her three-year-old boy, Normy, wouldn’t be coming to school that day; he had had one melt-down after another, and she had decided to keep him home. When I asked her how he was doing now, she said, ‘Oh, he’s happy as a clam – he’s out in the backyard now, playing in the sandbox.’ An hour later, I saw him standing at the door of the classroom, and when I went to greet him I looked around and didn’t see his mother. I said, ‘Where’s your mom?,’ and he said, very pleased with himself, ‘I came all by myself.’ Of course I didn’t believe it f or a minute, he lived quite far away, but I played along, and I said, ‘How did you know how the way? You’re amazing!’ and he said, ‘Oh, I went to Johnny’s house, and then I went to Susie’s house, and then, Gibreel’s house, and then I went to Sophie’s house…’ — and suddenly I understood that he had followed the route of the schoolbus. And I started to wonder, and said, ‘Normy, I have one more question – how did you cross Bloor Street? It’s very busy.’ And he said, ‘Well, I waited for the light to change from my shirt to my pants.’ And of course he was wearing a red shirt and green pants.”

This story, she said, shows how so much of what children learn comes not from being in school but from listening to what other people are saying around them. “You often see children crawling under tables to eavesdrop on adult conversations, and the more engrossed the child is, the more the adults forget they are even there,” she said with a chuckle. “So the adults talk about a lot of issues that they don’t mean their children to overhear. Meanwhile the children are developing a strong sense of how the world works.”

As they play, children are exploring ideas that they’re not yet totally sure about. They work out problems through play all the time, whether they build with blocks, do a puzzle, or practice on the climber until their hands are blistered, said Comay, pointing out to graduands that this also takes place in dramatic play with others. “If you really listen, you can hear them dramatizing their parents and the other adults in their lives. They are working out how adults function. And that’s a kind of deep thinking,” she said.

“Play is important at all ages. When children come back as teenagers to visit our school, at first they’re quite shy and don’t know what to do. But before you know it, they’re in the block center building with the little kids and having such fun as they play,” she said. “An older child solving mathematical equations is thinking very much like the young child who balances blocks so they don’t collapse. And it’s the same with the adult scientist — it’s the same playing with ideas, working to surmount hurdles. The intense focus and persistence that we see in children at play will serve them for a lifetime.”

She said that she feels extraordinarily lucky to have spent her life working with children. “I trust that you will feel the same. You have learned a lot in school, but you will really begin to learn about children the way I did – by listening to them and watching them carry out their ideas,” she said. “Your life as a teacher will always be interesting and surprising. They will be your teachers and you will be their students.”