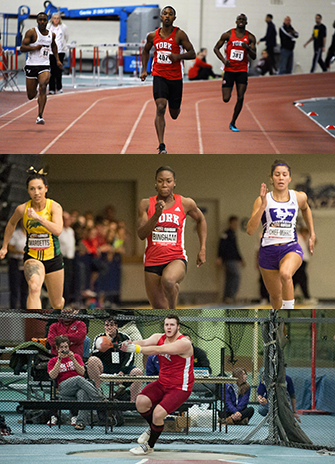 Three members of the York University Lions track and field team were among the 89 athletes selected to represent Canada at the 2015 Pan Am Games in Toronto this summer.

Third-year sprinter Khamica Bingham, a student in the Faculty of Liberal Arts & Professional Studies, will run in the women’s 100-metre and the 4 by 100-metre relay, and Faculty of Health alumni Dontae Richards-Kwok (BA ’15) and Daniel Novia (BA ’14) will compete in the men’s 4 by 100-metre relay and men’s hammer throw, respectively.

York assistant coach Richard Parkinson, who leads the Lions throwers, will be the throws coach for the Pan Am Games team as well.

All three student-athletes have had tremendous careers representing the Lions in the Ontario University Athletics (OUA) and the Canadian Interuniversity Sport (CIS). Bingham has been with the squad for two seasons and in that time won gold medals at the provincial and national meets in the 60-metre in each year, setting a new CIS record of 7.19 seconds at the most recent championship in 2015. She has also won gold medals in the 4 by 200-metre relays in both seasons as well as the national 300-metre title in 2014, and earned first-team OUA all-star and CIS all-Canadian honours. She was York’s female athlete of the year in 2014 and went on to be named the OUA female athlete of the year.

Internationally, Bingham has already made a name for herself on the world stage. In 2014 she finished in seventh place in the 100-metre at the Commonwealth Games in Scotland, becoming, at 20 years of age, the youngest Canadian female to reach the 100-metre final at the event since they became the British Commonwealth Games in 1970. She competed at the senior world championships in Russia as a teenager in 2013, running the anchor leg on the 4 by 100-metre relay team that broke the Canadian record and placed sixth overall, and ran on the same squad that qualified for the 2016 Summer Olympics in Rio.

Richards-Kwok is one of the most decorated student-athletes ever to compete for York University. In his five years with the Lions, he won 14 CIS medals, 10 of them gold, and was twice named the CIS championship most valuable performer and York male athlete of the year (2012, 2014). In 2014, his final season with the Lions, he won gold medals in the 60-metre, 300-metre, 4 by 200-metre and 4 by 400-metre to lead the Lions to the team banner for the first time since 1984. He recently graduated from York University with a degree in psychology.

He also has an impressive international resume. He ran on the 4 by100-metre relay team that won the bronze medal at the 2013 International Association of Athletics Federations (IAAF) World Championships in Russia, finished eighth in the 100-metre at the 2011 FISU Summer Universiade in China, reached the semifinals in the 100-metre at the 2014 Commonwealth Games in Scotland and has represented Canada at numerous other events around the world.

Novia competed for the Lions for two seasons and graduated from York Universitywith a degree in psychology in 2014. While with the program, he won OUA and CIS gold medals in the weight throw in back-to-back years (2012, 2013) and in 2012 set a new OUA record with a distance of 20.74 metres.

Bingham, Richard-Kwok and Novia will not just be competing on home soil, but on their home campus with the track and field competition set to take place at the brand new CIBC Athletics Stadium at York’s Keele campus on July 21-25. For a detailed schedule of track and field events, click here.