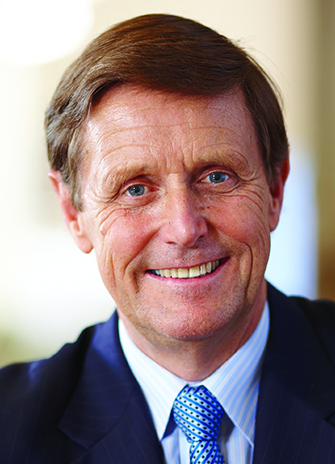 The Board of Governors of York University announces the appointment of Rick Waugh OC, as the chair of the board, effective July 1, 2015.

Waugh, a board member since January 2014 as well as an advisory council member for the Schulich School of Business, is formerly deputy chairman, president and CEO of Scotiabank. He serves on the board of directors for TransCanada Corporation, the Horatio Alger Association of Canada and the Multiple Sclerosis Scientific Research Foundation, and is chair of the advisory council for The Learning Partnership. He also sits on the external advisory board of the Inter-American Development Bank, the international policy advisory committee for the School of Policy at the University of Calgary, and is co-chair of the Prime Minister’s advisory committee on the public service.

Waugh holds a Bachelor of Commerce (Honors) degree from the University of Manitoba, a Masters of Business Administration from York University, he is a Fellow of the Institute of Canadian Bankers, and was awarded Honorary Doctor of Laws degrees from York University and Assumption University. In 2012, he was appointed as an Officer of the Order of Canada for his contributions to strengthening the financial services industry in Canada and abroad.

“York is very fortunate to have a leader of Rick’s stature as chair at this time of dynamic growth in the Greater Toronto Area and around the world,” says outgoing chair Julia Foster. “His proven leadership will ensure that York continues to create and inspire global citizens through academic and research excellence.”

“Education is facing many challenges including declining trends in enrollment and government funding yet York has now well positioned itself as one of Canada’s leading universities,” says Waugh. “I look forward to working with my fellow governors, administration, Faculty and students to provide great education, careers, and research as we reach even higher levels of achievement.”

The Board of Governors of York University announces the appointment of new board members. They are:

Laura Formusa has more than 30 years of experience in the utilities industry and served as president and chief executive officer of Hydro One Inc. from 2007 until her retirement at the end of 2012. She has served on several boards including the board of the Canadian Electricity Association, the Banting Research Foundation and DHX Media Ltd. She currently sits on the board of Equitable Life of Canada. Formusa is a tireless advocate for diversity, and for removing barriers in the workplace for visible minorities and women. In 2008 and 2009, she was named to the Women’s Executive Network’s Canada’s Most Powerful Women Top 100 list. She graduated with a Bachelor of Laws degree from York University’s Osgoode Hall Law School and holds the Institute of Corporate Directors Designation.

Jane Rowe heads Teachers’ Private Capital, the private equity arm of the Ontario Teachers’ Pension Plan. She serves on the board of Cadillac Fairview, Teachers’ wholly-owned real estate subsidiary, and is chair of the Investments Division Credit and counterparty committee. Prior to joining Teachers’ Rowe was executive vice-president, Special Accounts Management and Retail Credit Risk at Scotiabank. Rowe received a B.Comm. (Honors) from Memorial University, a Masters of Business Administration from York University’s Schulich School of Business and holds the Institute of Corporate Directors designation. She is an advisory board member of Memorial University’s School of Business and an international advisory board member of York University’s Schulich School of Business. She also sits on the board of United Way Toronto.

Ajay Virmani is president and CEO of Cargojet, Canada’s largest cargo airline, which he formed in 2002. He has more than 30 years of experience as an entrepreneur in the transport industry. Virmani immigrated to Toronto from his native New Delhi, India in 1975. He was honored with the prestigious “Entrepreneur of the Year Award” and his team was designated as one of Canada’s Top 50 Best Managed Companies. Most recently he received an Honorary Doctor of Laws degree from Assumption University. Virmani earned his Masters of Business Administration in International Marketing and Trade from the University of New York in 1985.

Bernard Lightman is the Senate nominee to the board. He is professor of humanities in the Faculty of Liberal Arts & Professional Studies at York University, and the editor of the History of Science Society’s flagship journal, Isis. He obtained his PhD in the History of Ideas at Brandeis University. Lightman taught at Queen’s University and the University of Oregon before coming to York University in 1987. His research focuses on the cultural history of Victorian science, including the rise of unbelief and science and religion in the popularization of science. His Origins of Agnosticism has become the standard work on the history of agnosticism. He is general editor of a monograph series titled “Science and Culture in the Nineteenth Century,” published by Pickering and Chatto. Lightman is a Fellow of the Royal Society of Canada.

Dan O’Hara is the student nominee to the board. He is completing his third year of PhD Studies in political science and is a teaching assistant in political theory. His interests include political economy, international relations, structures of postsecondary education and social justice. O’Hara has a BA (Honours) in Philosophy from the University of Waterloo and a Master’s in Political Science from York University.

Amanda Wassermuhl is the non-academic nominee to the board effective July 1, 2015. Wassermuhl is a long-term member of the York University community, having completed both her undergraduate and law degrees at the institution. Prior to rejoining York University in her current capacity as executive assistant to the dean of Osgoode Hall Law School, she spent several years in legal practice. Wassermuhl also serves as secretary to Osgoode’s Faculty Council.

With these changes, Julia Foster officially ends her term as chair of the Board of Governors.

“We thank Julia for her extraordinary leadership as chair of the board for the last three years,” says Mamdouh Shoukri, president and vice-chancellor. “Her contributions, focus and energy have taken us to a new level and enhanced York’s reputation as a leading Canadian university.”