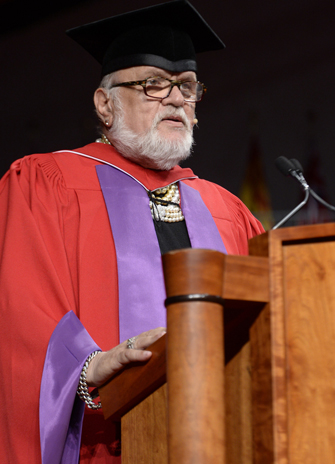 One of Canada’s most influential voices in the film industry, Salah Bachir, was at York University on Monday, June 15 to celebrate the graduates of the School of Arts, Media, Performance & Design and the Faculty of Liberal Arts & Professional Studies. He was also on the York University convocation stage to receive an honorary doctor of laws degree in recognition of his unwavering commitment to social justice, philanthropy and corporate responsibility.

Soft spoken and gentle in his delivery, Bachir began his convocation address by joking about the difficulty he encountered when writing the speech because he worried the end result would be full of clichés. He promised graduands that he would deliver the “shortest speech possible” feeling that perhaps champagne and a friend singing the Billie Holiday song that ends with the phrase “the difficult I’ll do right now, the impossible will take a while” would be preferable for those assembled. What he did deliver was a masterclass on how to live a life filled with purpose and meaning.

Bachir’s early experiences did much to design the pattern and fabric of his life as an activist, supporter of the arts and philanthropist. “My family came to Canada from Lebanon some 50 years ago with five children, none of us spoke English,” he said. “Watching my parents adapt is something I will never forget. We faced hard times and discrimination but Dad made sure that his kids would never want for anything. My mom raised five kids while running a successful dress boutique out of our basement in order to make ends meet.

“My parents and grandparents always had room at their table for those in need, they were my biggest influencers and will always be my true heroes,” he said.

The life lessons he learned at an early age formed the basis for the person he is today, said Bachir. “As artists you know that you have to be bold and be yourself. This was a lesson I learned at a young age. My best friend’s father would not hear of him hanging out with a ‘dirty Arab’ and I did not know that he meant me. When my Grade 7 teacher learned of this discrimination, she decided to conduct a half-day class on the contributions of Arab civilization to the world. Her name was Miss Rush and she has passed on, but from that day forward I have tried to follow her lead by addressing prejudice and discrimination head on. While my Grade 7 teacher was one of the first to leave a lasting impression on me, she was not the last,” he said.

Bachir said that he learned to care less about what people thought of him, describing that evolution as incredibly liberating and empowering. “As artists, performers and designers, this courage is something you already understand because the world demands it of you every day.”

He encouraged the graduands to never stop questioning and learning. “You don’t have all the answers but then none of us do,” observed Bachir. “Your quest for knowledge, growth and development does not end today, this is just the beginning of a long and fruitful journey. There will most certainly be challenges ahead, but when they come, do not hesitate to reach out for support.”

He spoke about his own illness and how coping with diabetes has not prevented him from leading a rich and full life. This is in large part because of his own network of supportive people. His husband acts as his nurse and administers (at their home) the dialysis that Bachir needs to survive. “It is an opportunity for us to spend 20 quality hours together every week,” he said, noting the life lesson in this experience is that “whatever the challenge, try to persevere and find the positive in the situation.”

Bachir told graduands that failure is also something not to be feared but instead embraced and understood. “I have experienced failure and learned to move on,” said Bachir. “Life is simply too short to let fear influence your decisions or dull your creativity.”

In closing, he urged those present to strive to make the world a better place. “I have always been deeply moved by, and interested in a simple slogan appearing in the New York Times above the masthead around Christmas. It says, ‘Remember the neediest.’ I am curious as to why it does not appear there year round. My interest inspired me to get involved in so many organizations, from the Canadian Foundation for AIDS Research, the Art Gallery of Ontario, the Canadian Film Centre, 519 Church Street Community Centre and many others. Someday you may be in the position to provide financial support to the causes that are important to you, but there is no need to wait as giving is not always about money.

“My generation is handing your generation a world full of strife, inequality and global warming. It may not be fair but how you handle these issues will impact the generations that follow,” he said. “Your time at York University has given you different perspective and the ability to use artistic expression and cultural innovation to create imaginative solutions to society’s challenges. I encourage to do so with conviction.”

Bachir is an influential voice in the Canadian film industry. He is president of Cineplex Media and publisher of Cineplex Magazine and Le magazine Cineplex. He is also owner and president of Phamous Characters, a sponsorship, marketing and publishing company. He is an avid art collector and patron of Canadian art, and an Art Gallery of York University founder. He served as chair of The 519 Church Street Community Centre Capital Campaign, for which he was instrumental in raising $6 million ($1 million from his own pocket).