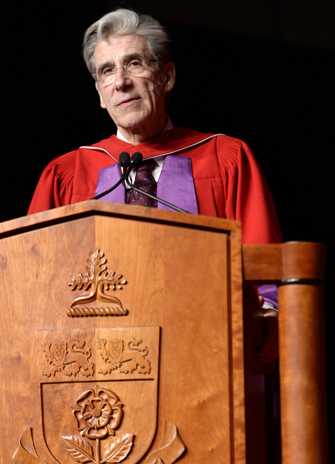 Dr. Julio Frenk, dean of the Faculty at the Harvard T.H. Chan School of Public Health and T & G Angelopoulos Professor of Public Health and International Development, and recently appointed as president-elect of the University of Miami, told York University graduates that they should embrace their ideals and ideas and strive to become agents of change in health care.

Frenk was at York University on Friday, June 12 to receive an honorary doctor of laws degree in recognition of his contributions to health care, public health and health care education. The conferring of the honorary degree took place during 2015 spring convocation ceremonies for the Faculty of Health.

In a powerful and passionate speech, Frenk spoke to graduands about the need for change in public health, particularly at this point in its history. He characterized their convocation as a point of transit and transition, which he said would be difficult but worthwhile, comparing their journeys to changes in the education of health professionals.

“Like spring itself, the notion of convocation speaks of the fresh sensation that one phase is about to end and another to commence. You are now in transit to a new station in your vital journey,” said Frenk. “I use the word transit intentionally because it is defined as the passage from state to another, but also as the ‘act’ of passing through.

“Both definitions suit you well,” he said. “You are leaving behind you student condition to join the corpus of professionals and scholars. You are also moving from the affable environment of a university into a changing and challenging world.”

He said their own personal change coincided with one of the most intense transformations in human history, particularly in the area of health care. This transformation, he noted, was expressed by the gain in life expectancy, from only 30 years in 1900 to more than double that number in 1985 with a life expectancy of 62 years. In 2015, the average estimate for the world is now 71 years.

“Professional education in health did not keep pace with the massive changes in health conditions and health systems, which took place in the later part of the 20th century,” observed Frenk. “The result is a mis-match of competencies to patient and population needs, poor team work and narrow technical focus without broader contextual understanding and weak leadership for positive social transformation.”

Following a review of the education system for health professionals by a commission he co-chaired. Frenk said that reforms in professional education in health care are now focusing on improving the performance of health systems by adapting core professional competencies to specific contexts while growing on global knowledge.

“This aspiration is not very different from the vision of the founding president of York University, the famed sociologist, Murray Ross,” observed Frenk.

The transition in health care education and the transition experienced by graduands is, said Fenk, “particularly complex because you are entering a professional world in flux that is interconnected globally as never before and faced with unprecedented challenges.

“But you came to this University, York University, because you knew that here you would find the instruments to successfully meet the demands of that inner calling and the challenges of this changing world,” he said. “Never forget that those instruments are none other than the seeds of the ideas and ideals that you teachers have planted in your minds and in your hearts. These ideas and ideals will change your own lives and possibly the lives of many people all over the world. If you make good use of these ideas, you will become knowledgeable and skillful experts. If you make good use of the ideals you will also become successful professionals. If you use both of them to become leaders, you will turn into enlightened agents of change.

He told graduands that while the challenges they face are unprecedented, so is their capacity to face them through knowledge and values. “This is irreplaceable role that universities play in our complex and often turbulent 21st century,” he said.

“Let this keen awareness of the challenges that lie ahead combined with the realistic optimism offered by the progress of knowledge and the spirit to serve society be the inspiration for the remarkable journey you are about to undertake,” said Frenk.

Dr. Frenk is a former health minister of Mexico, known for introducing comprehensive universal health care in his country. In addition to being the founding director-general of the National Institute of Public Health in Mexico, he served as an executive director at the World Health Organization, as a senior fellow in the global health program of the Bill & Melinda Gates Foundation, and as president of the Carso Health Institute in Mexico City. Since 2009, he has been dean of the faculty at the Harvard T.H. Chan School of Public Health and was recently named president-elect of the University of Miami.