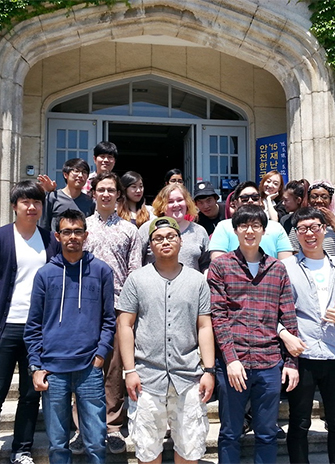 York U students gather for a group photo while in Korea

York University students studying in South Korea this summer are coming home with an international perspective on their education.

On June 13, students enrolled in a third-year Faculty of Liberal Arts & Professional Studies political science course returned from the city of Seoul, where they have been studying and living since mid-May.

As part of their study abroad course on contemporary South Korean politics, the students explored the mega-metropolis of Seoul (population of 22 million). They were accompanied by York University political science Professor Thomas Klassen who teaches the course South Korea: The Politics of Youth and Old Age (see May 12 YFile story). The course is one of 17 courses that allow York students to earn credits while spending part of the summer in various parts of the world. Activities in this course included tours of the National Assembly of Korea, palaces, temples, museums, markets and more.

“This has been one of the greatest experiences of my life,” says York student Christie Au Yeung. “I was able to learn about South Korean culture and politics from different perspectives and meet a lot of new friends.”

Professor Greg Sharzer (PhD ’12), who teaches in the Department of Global Communication at Korea’s Kyung Hee University, led the York students on a walking tour of Seoul’s Hongdae neighbourhood, a dynamic hub of artistic innovation.

“Students in Canada and Korea are interested in similar urban issues, like gentrification, development and green space,” says Sharzer. “Our walking tour was a chance to see the physical and social fabric of Seoul close up and make new friends along the way.”

While in Korea, the York students met and worked with students from several universities in Seoul, including Ewha Woman’s University, the largest all female postsecondary institution in the world.

“Spending an afternoon at Ewha University was truly exciting and memorable for our class,” says student Sanjay Singh. “The students were extremely kind in showing me their campus, including the typical hangout spots, which are just too cool!”

The York University students were paired with a group of students at Yonsei University, one of Asia’s top universities, with which York has a partnership and exchange agreement. The students from the two universities studied together in the classroom and also learned informally outside the university.

The students were invited guests at a full-day symposium held at the Korea Labour Institute on population ageing. Korean and international experts shared a wealth of knowledge with the Canadian visitors. As part of the symposium, the students were given a tour of Sejong City, South Korea’s new administrative capital.

“The symposium shed light on challenges the elderly face, which I previously had not considered,” says York student Nawal Mohammad.

A highlight of the students’ four weeks in Korea was a day-long tour of the demilitarized zone (DMZ) that separates North and South Korea. The DMZ is the last vestige of the Cold War and its history is of particular interest to political science students. Students were permitted to briefly cross over the heavily fortified border to stand on North Korean territory.

For Sam Park, one of students, the tour was “an eye opening experience like no other,” and standing on the border between the two countries revealed for him “the harsh reality of ideological conflicts.”

More photos of the students’ activities in Korea are posted on the course blog.