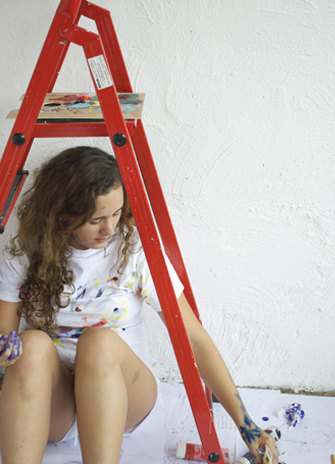 Guillermo de la Rosa, Giovanna Galuppo and Maria Lucia Llano are among the more than 80 international undergraduate students who are currently fulfilling these goals and investing in their futures at York University’s School of the Arts, Media, Performance & Design (AMPD).

“We’re delighted to welcome students from Latin America and around the world who come to us to advance their professional training and share their unique talents and cultural perspectives,” said Professor Anna Hudson, AMPD’s associate dean students. “Through their individual artistic practice and their collaborations with other students, international students like Giovanna, Maria Lucia and Guillermo enrich the academic experience of everyone they encounter – even as their own creative work is shaped by their interactions and experiences in our school.”

De la Rosa, who is graduating this month with a BFA in film production, hails from Caracas, Venezuela. He had originally planned to study in the U.S., but upon learning that Canada offers a comparable education at a lower cost, he chose York University’s film program for the intensive, hands-on experience it provides, preparing students for professional work in the industry.

In addition to academic and production work in film and media, de la Rosa also took practical courses in screenwriting, directing and acting.

“The human, empathetic, process-based approach of acting has definitely influenced my work as a filmmaker,” he said. “It has inspired me to create complex characters and explore important dilemmas.”

Asked about his plans after graduation, de la Rosa said: “Getting a creative job in Toronto and keep making movies I love. I’m also developing ideas for my first feature production, which will most likely be filmed in Venezuela.”

Galuppo, who has just completed her third year of studies in visual arts, is also from Caracas, where she earned a degree in illustration. Looking to further her studies, she chose Canada for the creative opportunities and quality of life.

“Art is controversial, and some say that it’s not going to change the world,” she said. “But I’m an optimist and I believe in a better world. I want to give the best I can give and be the best I can be, and art is my way of doing it.”

A musician as well as a rising visual artist, Galuppo enthusiastically embraces creative opportunities both on and off campus. “My artwork has been shown in galleries downtown, and I’ve performed many times in different venues, including with a guitar trio and playing folk music with the Venezuelan community,” she said. “But the most fulfilling experience I’ve had as a musician in Toronto has been singing with hip-hop musician Emmanuel Jal, a former child soldier from South Sudan, who’s spreading the word of peace through his music. I’ve performed with his record label that helps create awareness and fundraise for schools in Africa.”

Galuppo’s advice to international students? “Work hard – and say yes to every opportunity!”

Llano came to AMPD last fall from Bogotá, Colombia to study dance. “I chose York University because its well-rounded dance program will not only allow me to pursue my passion, but also let me become a cultural ambassador, diffusing the art of dance across multiple communities and schools,” she said. “My dance courses have fulfilled my expectations and more.”

Initially, Llano said, she was overwhelmed by the scale and the extraordinary level of multiculturalism she found in Toronto and at York University.

“While at times I felt a little lost in such a big city and campus with so much on offer, there’s a lot of support to help international students to get involved in the community and enjoy their time at York,” she said. “Canada is a very nice place to live and be independent. It will open your eyes to the world, to different cultures and mentalities that will enrich your studies and experiences.”

“It’s a really hard decision to leave behind family, friends and everything that we know at home,” Llano said. “However, I would say that coming to Canada has been the best experience of my life!”