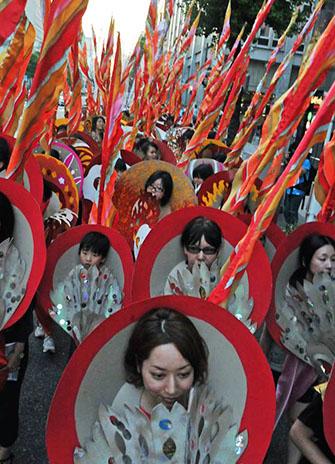 Internationally recognized Trinidadian artist and “mas” man Marlon Griffith is the 2015 Louis Odette Sculptor-in-Residence in the School of the Arts, Media, Performance & Design (AMPD) at York University. His residency started May 19 and continues to June 5 in conjunction with the Intensive Sculpture Workshop, a fourth-year course offered by the Department of Visual Art & Art History.

Originally from Port of Spain, Griffith began his artistic practice as a Carnival designer, working in the “mas” (or masquerade) tradition of Trinidad. This background deeply shapes his work as a visual artist, which integrates performative, participatory and ephemeral characteristics derived from Carnival.

Working with a group of 15 AMPD students, Griffith is building seven large-scale, wearable costumes to be featured in a 300-person procession titled Ring of Fire. The project was commissioned by the Art Gallery of York University (AGYU). The procession will take place Sunday, Aug. 9, along University Avenue, from Queen’s Park to City Hall during the Parapan Am Games.

The costumes have been designed with specific processional performers (called “Sentinels” within the project) in mind. This diverse group encompasses individuals with different mobilities and sensory capabilities, making for unique constructions that are sensitive to the needs of the performers.

Griffith will also oversee the students’ work on their own projects, which they will conceptualize in keeping with Griffith’s theme.

“It’s a unique opportunity for our students to participate in a city-wide, collaborative project,” said York U visual arts Professor Kevin Yates, coordinator of the residency and workshop course. “They’re also learning new techniques, such as large metal frame construction and how to use the new plastic vacuum molding machine we’ve acquired for this residency.

“Bringing Marlon’s designs to life and customizing them to the specific needs of the performers is a dynamic and highly satisfying artistic challenge for our students,” said Yates. “They get to meet and work with the performers as the construction of the costumes proceeds. It’s exciting to see the collaboration and relationships develop.”

As part of his residency, Griffith will give a free public talk on his creative process for Ring of Fire and other works on Thursday, June 4. His illustrated lecture takes place at 1:30pm in Room 130 in the Joan and Martin Goldfarb Centre for Fine Arts on York University’s Keele campus.

Ring of Fire is inspired by the Anishinaabe Seven Grandfather Teachings: Wisdom, Courage, Respect, Honesty, Truth, Humility and Love, which serve as the basis for the Sentinel characters, their costumes and the organizational structure of the procession, as well as guiding the working principles of its making.

The procession will bring together disability dancers from Picasso Pro and Equal Grounds, the Mississaugas of the New Credit First Nation, members of Toronto’s Capoeira Angôla community, and young spoken word poets from Jane-Finch, Malvern and Regent Park. “Mas camps” for costume production, spoken word, movement and music are being held throughout the city at some of Toronto’s leading arts organizations with strong community roots, including Art Starts, SKETCH, COBA, the Malvern S.P.O.T. and Success Beyond Limits.

Griffith is the 2014-15 AGYU artist-in-residence. His 2015 Louis Odette Sculpture Residency is a partnership project of AMPD and AGYU.

Ring of Fire is commissioned by the AGYU and supported by the Ontario Arts Council, Ignite Ontario, the Trillium Foundation and York University’s School of the Arts, Media, Performance & Design. An exhibition of the project will run from Sept. 23 to Dec. 6 at the AGYU, and a publication supported by Partners in Art will be released in 2016. Ring of Fire is curated by AGYU Assistant Director/Curator Emelie Chhangur.