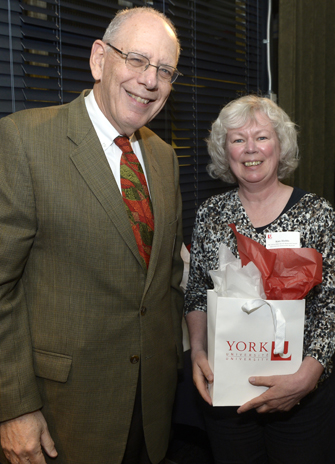 A dozen York University students were recognized for their work in poetry, short fiction, screenwriting and stage writing at the 2015 President’s Creative Writing Awards and the Faculty of Liberal Arts & Professional Studies’ (LA&PS) Creative Writing Program Awards ceremony on May 12.

“I see, here, our literary future,” said Martin Singer, dean of LA&PS, adding that the winners and honourable mentions will no doubt blossom in their careers and become well-known writers as many York alumni have in the past.

“We are here to acknowledge the educational value of creativity and the centrality of creative expression to human experience,” said Helm.

Faculty members from the English, Creative Writing and Film departments judged the awards entries, with many noting that it was hard to select among such a talented group of students.

He was pleasantly surprised when he found out that one of his students, Akash Bansal, was the winner in the Poetry category. Bansal’s poem, “Foreplay and Oranges off the Coast of Florida,” deals with complex geopolitical issues through the eyes of a young, enthusiastic and thoughtful speaker.

“I was doing research on Guantanamo Bay and decided to write a poem comparing my childhood here in Canada to what life would be like for a young prisoner such as Omar Khadr,” said Bansal, a fourth-year double-major student in screenwriting and creative writing.

The following is the list of winners of the 2015 President’s Creative Writing Awards:

The following were the winners of the LA&PS Creative Writing program awards:

The Babs Burggraf Award in Creative Writing offers financial assistance to a fourth-year student majoring in creative writing with proven talent and achievement in the area of short story writing. Faculty members in the program nominate students who have submitted short stories as part of their academic work for the session.

The Judith Eve Gewurtz Memorial Poetry Award was established and presented by York humanities Professor Margo Gewurtz in memory of her daughter Judith, honouring the best poem by a creative writing major who is completing his or her third year of study.

The Lorna Marsden Prize has been established to honour a York student who writes what is deemed the most accomplished and persuasive creative work written in French poetry, short fiction, short drama or in the mixed genres.