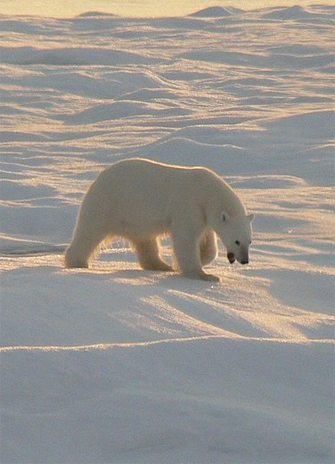 A lone Polar bear on the Beaufort Sea ice cap

Polar bears (Ursus maritimus) are cool. They are probably one of the most recognizable and revered species on the planet – large, dangerous, powerful creatures who rule over their environment with no natural predators of their own.

While they are powerful, they are also vulnerable, and are now officially recognized as a species at risk on an international scale. They are endangered because shifts in climate and environment threaten their diet and safety. Of the 19 global subpopulations of polar bears, three are currently thought to be in decline – with Western Hudson Bay, a region encompassing southern Nunavut and northern Manitoba, showing a population decline at historic levels.

Luana Sciullo, a fourth-year PhD student at York University, is studying the effects that environmental change is having on bears in Churchill, Man. She says these majestic animals are “absolutely reliant” on their marine environment, which is being threatened by global warming. “I find it amazing that such an apex predator can be so threatened by something we cannot see,” she says. “It shows us how delicate ecosystems can be. Despite polar bears’ amazing ability to adapt, they are still at risk, simply due to how rapidly these changes are occurring in a sensitive ecosystem like the Arctic.”

Because polar bears range across thousands of miles of woodland, coast and Arctic tundra, the science of studying them can be challenging and dangerous. Sciullo’s research consists of biannual data collection in the spring and the fall from the Churchill bear population. Since she and her colleagues study an area of more than 12,000 square kilometres, they use helicopters to locate bears, which are then safely tranquilized from the air. Then, researchers have between 30 and 40 minutes on the ground to tag the bears and take physical measurements and a small biopsy sample from the rump, which is used for body condition assessment and diet analysis.

The tagged bears are then tracked throughout their lives, allowing trends to be identified and assessed. “Since we have nearly 20 years of biopsies on this subpopulation, we can determine if diet and body condition have changed over time and attempt to identify potential habitat shifts that may have occurred during the same timescale,” Sciullo explains. “Our preliminary work shows body condition of females in the fall has declined over a 10-year period.”

The most important safety measure in undertaking this work is the monitoring of weather conditions. Clear skies, lack of wind and a comparatively reasonable temperature are ideal for the data collection as they allow the team to survey the landscape and monitor the animals safely from the air, ensuring that the bears are completely sedated prior to landing. The analysts then work speedily so that minimal time is spent out on the ground. In the milder fall, Sciullo explains, they can expect to assess up to 70 individual bears in the space of two or three weeks. During the spring collection, a combination of harsh weather, low visibility and increased camouflage of the bears against a snowier landscape vastly reduces this number, sometimes to less than five family groups over a similar length of time.

Unsurprisingly, the primary concern in this line of work is minimizing risks. “The bears’ safety is number 1 priority when working in the field. If temperatures become too cold we don’t handle the bears because they need to maintain body temperature – especially important for cubs who haven’t amassed enough body fat to keep warm.”

If the data collection is given the green light, the tranquilized bear’s condition is continuously monitored, including body temperature, breathing rate and heart rate. Sciullo adds that the drug used to sedate the animals has been tested extensively and used on free-ranging polar bears since the 1980s; bears can thermoregulate and respire normally during the entire process and safely wake after the team is finished.

Research on polar bears in the Western Hudson Bay region has been ongoing for more than 20 years, but the increased effects of global warming and changes to sea ice habitat have given it an unprecedented importance.

“Polar bears have become iconic and synonymous with climate change in the media,” says Sciullo. “This is excellent, not only for raising awareness about the climate-based issues facing many ecosystems across the globe, but for showcasing the Arctic as an environment which is crucial to the global climate that is beginning to experience substantial change.

“Polar bears are at the top of the food chain in these environments, and changes to their diet or body condition would likely impact survival, especially if reflected in females and cubs,” adds Sciullo. “Eradication of such an important species would exert top-down effects and influence other trophic levels, including their prey species. Climate change and its influence in the Arctic extends beyond one species; it becomes an ecosystem-wide issue that can disrupt delicate interactions between species and their environment.”