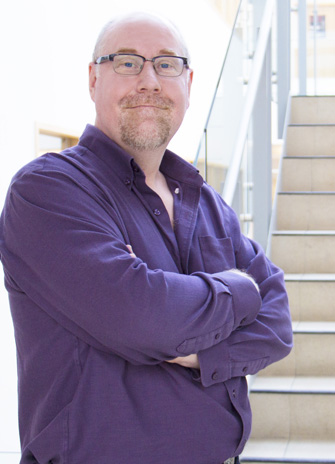 Pink Floyd was formed 50 years ago in Britain. The band’s concept albums string songs together to form and shape each album’s overarching theme. Musician Roger Waters was the key architect of Pink Floyd’s concept albums from 1973 to 1983, writing all the lyrics and much of the music during those years. Rose’s in-depth analysis and original interviews with Waters wades through the richness of albums such as Dark Side of the Moon (1973), Wish You Were Here (1975), Animals (1977), The Wall (1979), The Final Cut (1983) and Amused to Death (1993), the latter of which is Waters’ third solo album.

“The least known detail that comes out in the book is exactly how richly the albums cohere overall,” says Rose, who finds this body of music to be a significant cultural critique.

The albums reflect both success in the music industry and the potential decline of our planetary culture, he says, yet they also defend human values “against everything in life that conspires against them.”

Rose, who has experienced the “transcendent” effect of a live Waters concert, wrote this book because he “never thought anyone had gotten down to how rich the concept albums really were,” he says. “There aren’t any extended books looking at Pink Floyd’s repertoire as extensively as I have done here. I’m looking at the lyrics to try and interpret their meanings. At the same time, I’m looking at how the music influences those meanings.”

Pink Floyd first rode the wave to fame with Dark Side of the Moon. In 2014, the album was named the longest running on the Billboard 200, spending 861 weeks or 16 non-consecutive years on the charts.

“This album is monumental because it has universal themes,” says Rose. “It’s basically about all the things in life that are anti-life and cause us to feel like we might be going mad.”

At the time, the music industry provided artists with a lot of room for creativity, he says. “After Pink Floyd had that enormous success with Dark Side of the Moon, they more or less had a free hand to do whatever they wanted.”

Wish You Were Here “is a response to the success of the Dark Side of the Moon, including all of the unsavoury facts of the music industry the band fell out of favour with,” says Rose. “It really is a lambasting of the music industry and feeling like they didn’t quite know what to do afterwards, feeling not quite together themselves.”

Band member Syd Barrett became schizophrenic and the band believed the “pressures of stardom” was a contributing factor, in addition to drug use, he adds.

The Wall, Pink Floyd’s second most popular album, is “the narrative of a character who suffers trauma in his early life and essentially builds a wall around himself, which is meant to protect him from the external world, but divides him from his loved ones; and therefore he starts to decay and through that sort of decay, turns into a fascist-type figure, which is the primary point about what happens when we isolate ourselves from others,” says Rose.

But Amused to Death “was Waters’ best work ever,” says Rose. “He takes the title from communications theorist Neil Postman, who wrote a book called Amusing Ourselves to Death [which argues] that everything that appears on television is presented as entertainment. Waters’ twist on that is his concern that war is turning into entertainment.”

Leading up to the album’s release, “the U.S. bombing of Tripoli (1986) is seen as the first such attack that was timed to appear on the evening news,” he says, “but the first Gulf War (1990) is the real beginning of this.”

Pink Floyd’s concept albums don’t lose their relevance in more modern times, adds Rose. “There are many takeaway messages from these albums, but perhaps among the most important is that we should refrain from letting economics dictate all our collective decisions, and, on the individual level, in Waters’ own words, they’re about ‘not allowing rock and roll or making cars, or selling soap, or getting involved in biological research, or anything that anybody might do … not letting that become … more important than friends, wives, children or other people.’ These are the primary ways in which the albums affirm human values.”