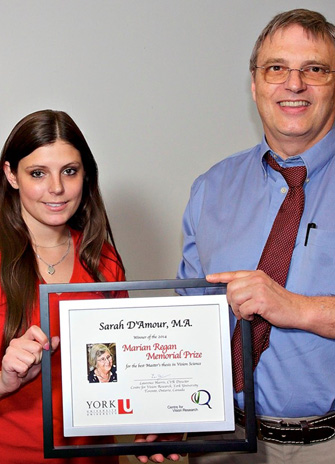 The E. Lynn Kirshner Award was presented to Lesley Deas (supervisor Professor Laurie Wilcox) for her paper “Gestalt grouping via closure degrades supra-threshold depth percepts” published in the Journal of Vision (2014) 14:9:14.  Harris, who is the director of the Centre for Vision Research, presented the awards.

The prize is named for Professor Marian Regan (1937-2010), who was a beloved member of the Centre for Vision Research and the wife of professor emeritus David Martin Regan. Marian was born in Folkstone in England but her family soon moved to London. She was evacuated to a farm in Wales with her brother and sister during the Second World War. She read mathematics at London University, where she met her future husband in 1956. Mrs. Regan taught mathematics in a girl’s grammar school in London. After moving to Newcastle-under-Lyme in 1965, where her husband was employed at Keele University, she continued teaching mathematics.

In 1975, the Regans moved to Dalhousie University. It was there that Marian Regan completed a master’s degree in mathematics while her two sons were at school. In 1986, David and Marian Regan moved to York University, where Marian Regan developed a novel mathematical technique for modelling nonlinear systems, such as the human visual and auditory systems.

She was awarded a PhD under the supervision of Professor Ralph Nichols, then Chair of the Department of Physics, and went on to use her technique to model human steady-state electrical and magnetic brain responses to visual and auditory stimulation. She published papers in numerous journals, including Vision Research, Auditory Research, Brain Research, Experimental Brain Research, Biological Cybernetic, and the Canadian Journal of Neuroscience. Marian Regan died on April 17, 2010.

The E. Lynn Kirshner award is named for Eva Lynn Kirshner. Lynn completed her Masters on “Amblyopia: a consequence of suppression or blur?” under CVR faculty member Marty Steinbach in 1985. She died of cancer on July 23, 1989 while working on her PhD. Her husband, Ron Kirshner, established this award in her memory in 1995.