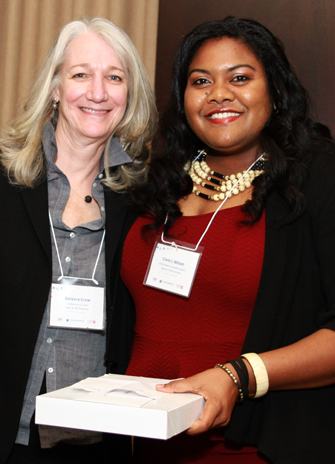 Marla Chodak, academic policy analyst in the Office of the Vice-President Academic and Provost at York University, provided the following conference recap to YFile about the recent Senior Women Academic Administrators of Canada (SWAAC) conference:

From April 30 to May 2, York University hosted the annual conference of the organization known as SWAAC – Senior Women Academic Administrators of Canada. SWAAC was founded in 1987 to provide a voice for women in senior administrative roles at Canadian universities and colleges, and its annual conference offers an opportunity for women leaders to share issues and ideas.

The conference was kicked off by keynote speaker Sarah Stein Greenberg, executive director of the Hasso Plattner Institute of Design (the “d. school”) at Stanford University, who offered a thought-provoking perspective on redesigning postsecondary education. She spoke to the importance of students taking ownership of their own education, including through opportunities for learning beyond formal learning environments. She also argued for greater flexibility for students to design their own educational paths by moving through postsecondary education at their own pace, allowing them the freedom to explore a range of subject matter, focus on a particular area and put what they have learned into practice – and perhaps moving in and out of university study throughout their lifetime. In this context, a university might be structured around teaching “hubs” rather than the silos of Faculties and departments, and students might design “missions” rather than choosing majors, selecting courses and experiences around themes or issues that are meaningful for them and developing competencies and skills that would be reflected on transcripts. These ideas very much resonate with York’s interest in experiential education and increased flexibility in learning, and Ms. Stein Greenberg left participants with a great deal to reflect on.

At other sessions, participants had an opportunity to explore universities’ and colleges’ relationships with a variety of communities, including industry, their local communities, the non-profit sector and government. A very informative workshop on engaging with the media was offered by Shari Graydon, founder of Catalyst of Informed Opinions. York’s President Emerita Lorna Marsden offered reflections on how women have made change in Canada over her years in public life. Participants also had an opportunity to break into small groups to share ideas about mentoring of both academics and administrators, as well as about a number of important current issues, including sexual assault, mental illness and diversity.

A highlight of the conference was the presentation of several awards at the gala dinner: the Graduate Student Award of Merit, the Student Leadership Award and the SWAAC Recognition Award.  Recipients were as follows:

Graduate Award of Merit (for academic achievement and community contributions by master’s or PhD students):

The stories of all of these award winners are inspiring, and York is particularly proud of its nominee Ciann Wilson. She is pursuing studies in the area of community health and her doctoral research will have important implications in a multicultural environment in relation to the understanding of HIV and AIDS in African diasporic and indigenous communities, including policy development and prevention. She serves as co-chair of a mentorship and advocacy group for graduate students from marginalized communities, the Accessibility Community Equity (ACE) committee. She has also worked as a research consultant for the Public Health Agency of Canada and serves on a number of community boards and committees.