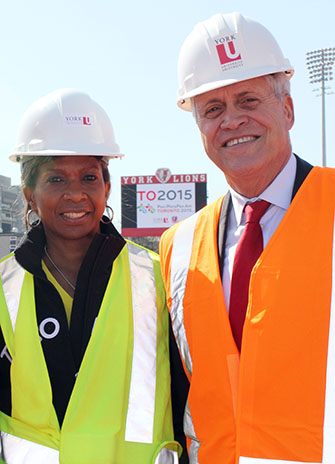 Thursday, May 7 marked a milestone in York University’s Pan Am/Parapan Am journey.

During a small ceremony held in the CIBC Pan Am/Parapan Am Athletics Stadium on the University’s Keele campus, York University President and Vice-Chancellor Mamdouh Shoukri, Canadian Olympic Athlete and York U alumna Molly Killingbeck, and Allen Vansen, executive vice-president of operations for Toronto 2015, put down the last piece of the stadium’s running surface. The trio were then presented with commemorative pieces of the track.

York University will welcome thousands of athletes from 41 countries in the Americas and the Caribbean this summer. Canada has had the honour of hosting the games twice in the past, but it’s a first for Toronto this year, and a first here at York. The Pan Am and Parapan Am Games are the world’s third largest international multi-sport games, held every four years immediately before the Olympic and Paralympic Summer Games.

In addition to hosting the track and field portion of the games, York University will also host the tennis competition in what is being called the Canadian Tennis Centre, known locally as the Rexall Centre.