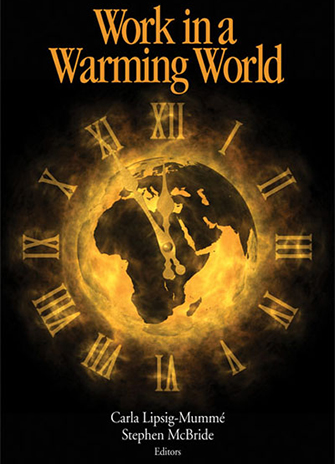 Roads are melting under the extreme heat of an Australian sun and heaving exponentially in Canada’s far north as the mercury dips ever lower. The biggest threat to infrastructure in Canada and around the world is not that it’s aging, but climate change, suggests a new book, Work in a Warming World.

“The issue of infrastructure is not just that it has been around for a while and so we have to take care of it. Climate change is making the building, maintaining and upgrading of infrastructure a whole new ball game,” says York University work and labour studies Professor Carla Lipsig-Mummé. Current core infrastructure, including roads and transit, may not withstand the extremes in weather brought on by changes in climate. “It will require various occupations and professions, such as construction workers, engineers and architects, to be trained differently so they can plan and build infrastructure that can stand up to climate change.

“The world of work has a potential for responding creatively, pro-actively and effectively to the threat and challenge that climate change poses to Canada. It is webbed with organizations that can in fact do something about the impact of climate change and figure out how to move beyond that impact,” says Lipsig-Mummé, who leads the $2.5-million Social Sciences & Humanities Research Council of Canada partnership grant-funded project, called Adapting Canadian Work and Workplaces to Respond to Climate Change, Canada and Global Perspectives.

She argues that the labour force and unions need to become involved in effecting positive change, and that environmental and economic policy need to come together in addressing global warming. Part of that is retraining the workforce to adapt to climate change. “If you’re going to retrain the workforce, you need to integrate that with economic development, employment and labour force, social service, regional economic development and taxation policies,” says Lipsig-Mummé. “The European Union integrates policy on all levels so that workers can get the skill and adapt to the new work. The result is a reduction in GHG emissions.” In Canada, there is a lack of a much-needed national climate change policy and, instead, many of the provinces, including Ontario, are trying to implement their own climate policies.

Researchers and practitioners, from environmental groups and national unions to universities, have contributed to the book and the wider discussion, which explores how climate change is altering the way people work and how working differently can reduce GHG emissions.

“We’re on a campaign to let Canadians know how much potential there is for the world of work, for example, to reduce the greenhouse gas emissions at work, and not simply say we’re going to do it, but to do it really and do it measurably,” says Lipsig-Mummé. “We’re doing this to get things moving where they haven’t been before.”

The book addresses three questions: What impact is climate change having on Canadian society; what are the implications of Canada’s responses to climate change; and what are the best practices – in Canada, mostly, but also elsewhere? And here, the book’s contributors turn to several European countries and the United States.

In one chapter, Simon Fraser University Professor John Calvert compares Germany and the United Kingdom, and finds that Germany and Denmark are doing a better job at training their workers in the construction sector and responding to climate change. “The Canadian construction sector has the potential to make a key contribution to reducing greenhouse gas emissions and energy use,” writes Calvert. “However, it has major gaps in training and skills development that compromise its ability to do so.” An extensive, mostly unregulated, underground economy and a lack of recognition of the potential contribution building trade workers and their unions could make has only added to the problem in this country, he contends.

Other chapters examine how climate change and the response to it is impacting women’s work, as well as the defeat of Ontario’s Green Energy Act at the World Trade Organization and what is and can be done instead. Ontario’s manufacturing sector could experience a real boost through the manufacturing of renewables, suggests Lipsig-Mummé.

“We’re looking at municipalities and the promise that midsize cities in Canada have powers they are just beginning to use to clean their air, adapt their work, reduce the GHG emissions, as well as look at transportation and infrastructure,” says Lipsig-Mummé. “Cities are emerging as an unexpected place to implement the adaptation of work and essentially the infrastructure of society. There are still untapped powers there.”

Work in a Warming World takes on the issue of climate change and the world of work today and in the future. It follows the work done in Climate@Work (Fernwood Publishing, 2013), also edited by Lipsig-Mummé.