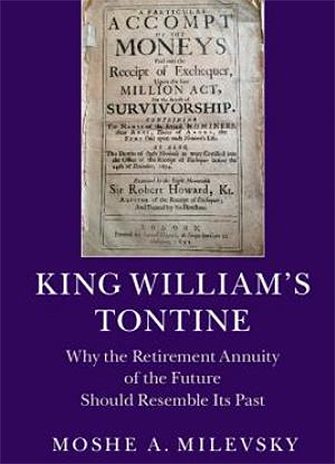 Novels and films often show the final survivors of a tontine killing each other to be the recipient of the investment scheme’s jackpot, but that didn’t happen in real life, says Schulich School of Business finance Professor Moshe Milevsky. In his new book, King William’s Tontine, Milevsky argues for the return of the 17th-century tontine with a few modern day modifications.

What is a tontine? Invented by Italian entrepreneur Lorenzo de Tonti in about 1650, a tontine is a precursor to today’s government bond, which pays semi-annual coupons or interest payments for the next 20, 30 or even 50 years. “Today’s bond can be bequeathed to your children, given to your estate or sold, but with the tontine, at least 350 years ago, the interest would go to the remaining tontine survivors,” says Milevsky.

In King William’s Tontine: Why the Retirement Annuity of the Future Should Resemble its Past (Cambridge University Press), Milevsky tells how King William III of England tried to raise money to finance his war against France’s King Louis XIV by issuing the government’s first tontine – which became known as King William’s tontine – in 1693.

King William “tried to raise about a million pounds, which today would be hundreds of millions of pounds. This was before the Bank of England was created in 1694….and the tontine wasn’t a very successful attempt,” says Milevsky. That’s because not enough people bought into the scheme to make it a success for the king. And, King Louis XIV also issued a tontine and some English speculators bought that as a way to hedge their bets in a time of war. However, a few thousand people did buy William’s tontine and there are detailed records on what happened to them over time and the income they received.

“For the people who died early, it didn’t work out very well for them and I’m sure they and their descendants would have wished they’d just kept the money in an equivalent of a bank or kept the money invested somewhere else,” says Milevsky. But for those who lived 30 years after they purchased the tontine, it worked quite well, he says, “because their coupons or income were extraordinary”.

Milevsky is convinced that bringing the tontine concept back today makes good sense for retirement planning in the 21st century. “I think that a suitably modified plan should be revived primarily because we need to give people choices at retirement. We have to increase the repertoire of pension products that are available,” he says.

“When you take a look at investment products for accumulating money, there are hundreds of categories out there. There are mutual funds, exchange traded funds, individual securities, managed portfolios, index-linked GICs, which represent so many ways to save money, but when we look at ways to de-accumulate or dis-save or spend down money, there are not many choices. And, of course, today’s tontine would look noticeably different than it did 300 years ago, for obvious reasons.”

In King William’s Tontine, Milevsky explains what tontines are, how they use to work and how he sees them contributing to today’s financial planning options.

He makes several suggestions in the book on how to improve the tontine for today use, based on his joint research work with York University mathematics Professor Thomas Salisbury, including banning people from being allowed to speculate on other people’s lives, especially that of strangers. In addition, they shouldn’t be allowed to trade them. “There are eight or nine suggestions that I summarize in the last chapter on how we can bring tontines into the 21st century and not use the exact same model that was out there 300 years ago.”

Inevitably the first question people ask is: “Hey wait a minute, does this mean that the last survivor gets all?” No, says Milevsky. That’s only happens in fiction. “I could not find any evidence what so ever in reality of people murdering each other to get their tontine payment. More importantly, every single tontine that I came across, had a clause that said, once 10 to 15 people were alive, so once we reached that very end where we’d shrunk the group from a few thousand to 10 to 15, payments were frozen and additional deaths had absolutely no impact at all on future payments.”

Milevsky says he’s not advocating for everyone to go out and buy a tontine. “I’m not saying that this is the solution to the retirement dilemma. I’m saying, give us some choice. Put it on the retirement income menu. People should be able to choose between a tontine-like product and a conventional life annuity just like they did 320 years ago.”

He isn’t the only one suggesting tontines be revived. Tontines have been written about in several law, insurance and finance journals in recent years. “There’s a renewed energy to this discussion because of all of these people approaching retirement, who need to convert their assets into income that will last for as long as they live.”

In comparison to annuities, Milevsky says the tontine offers more transparency. “One of the things I really like about this is, at the end of every year, or every six months, you knew exactly why you were getting that payment. You knew that I am receiving exactly an eight pound dividend; five of them are the coupon on the bond and three of them are because other people died and are not around to collect so I got part of their money.”

King William may not have won the war through the tontine, but today’s retirees may yet benefit from the hybrid investment and insurance scheme.

King William’s Tontine: Why the Retirement Annuity of the Future Should Resemble its Past is currently available in Canada and at the York University Bookstore.

Milevsky is the author of 12 books, including Are You A Stock or a Bond? Create Your Own Pension Plan for a Secure Financial Future, The 7 Most Important Equations for your Retirement, Pensionize Your Nest Egg and Your Money Milestones. In addition to being a tenured professor at York University’s Schulich School of Business and a member of the Graduate Program in Mathematics and Statistics, Milevsky is executive director of the non-profit IFID Centre at the Fields Institute for Research in Mathematics in Toronto. He is also managing director of the Pi Longevity Extension Corporation, which is focused on helping pension funds, endowments and individuals extend the longevity of their investment portfolios.