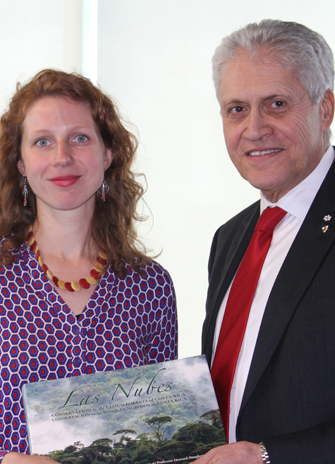 The term “4G” may be synonymous with super connectivity in the wired age. At York University, 4G also refers to the four green accolades announced last week.

At a special event on Friday, April 24 at the Keele campus to mark worldwide Earth Day and Earth Week events, York President and Vice-Chancellor Mamdouh Shoukri substituted “sustainability” for “super connectivity” when he announced four major accomplishments that advanced the University’s focus on sustainability.

An audience of more than 100 community members heard from Shoukri that for the third year in a row York University has been named one of Canada’s Greenest Employers. The award, which was announced last week by Mediacorp Canada Inc., is given to employers who lead the nation in creating a culture of environmental awareness. First conceived nine years ago, it was given to only 60 organizations across Canada this year, including half a dozen universities.

“As a university committed to leadership in sustainability research, education and action, we are especially proud that our early efforts were recognized, and as this ongoing recognition affirms, we have continued to build on those efforts to innovate,” said Shoukri.  “We are not only reducing our ecological footprint, but conserving resources that can be invested in academic programming for our students.”

In addition to this honour, Shoukri announced that York University has again been ranked second by Corporate Knights magazine on its Future 40 Responsible Corporate Leaders list for 2015.

“Corporate Knights considers the Future 40 as a kind of farm team that feeds future sustainability leaders into the big leagues of our Best 50 ranking. In this respect, the Future 40 offers us insights into how performance on the Best 50 might change over time,” wrote the publication’s editor-in-chief, Tyler Hamilton in an editorial about the announcement.

“The York University President’s Sustainability Leadership Awards recognize individuals and groups on our campuses who are contributing to making York a leading university on sustainability in Canada,” said Bunch. “The awards are designed to help us raise awareness on the important work that sustainability champions are doing at York, and to provide much deserved recognition of their work. This is the second year of the awards, and we are very pleased to have an excellent group of award winners again this year.”

The recipients of the 2015 President’s Sustainability Leadership Awards are:

During the spring of 2014, a team in Procurement Services implemented an electronic-bid submission and evaluation software for all of its Requests for Proposals. This initiative had two objectives: to implement increased efficiencies for York’s vendors and employees, as well as providing an opportunity to significantly reduce the amount of paper required for this process. The staff involved in implementing this project took this on over and above their normal workload with no extra resources. The results of this initiative speak for themselves: to date, 29 projects with a total of 107 proposals have been submitted using Bonfire, resulting in 39,400 pages of printing saved.  As the University’s Procurement Services department converts the remaining proposals to Bonfire, the paper usage savings will continue to grow.

York’s Food Services Department has been greening food operations here at the University for several years.  Approximately 32 per cent of food purchases made by the department are local, certified Sustainable or Fair Trade through third party certification. The department’s Lug a Mug and Eco-Container programs, York community members are able to reduce the waste associated with their food purchases.  And this past year, Food Services installed an Urban Cultivator, which is a kitchen greenhouse that allows them to grow herbs and vegetables in house, greatly reducing the carbon footprint associated with these operations. Much of this success is also due to an ongoing, productive relationship with Aramark Canada.

Glendon Roots and Shoots is a student environmental club that has been active on sustainability issues at Glendon College for several years. Each year, Glendon Roots and Shoots organizes a wide variety of sustainability themed events, including: campus clean up days, clothing swaps, urban gardening and nature walks on the Glendon campus, and the annual Halloween Trick or Eat Food Drive, which this year collected 570 pounds of non-perishable goods which were donated to North York Harvest Food Bank. Recently, Glendon Roots and Shoots have also been providing reusable water bottles to Glendon Students in support of the University’s phase out of bottled water this year.

An alumna and employee of York University, Heath graduated with a Master’s Degree in Environmental Studies, specializing in waste management. She is the Waste Management Supervisor with the Grounds, Fleet & Waste Management Department in Campus Services & Business Operations (CSBO). Since joining Grounds, Fleet and Waste Management Department, Heath has led many waste initiatives, including the implementation of York’s Zero Waste Program. As part of this program, she has performed several waste audits, which provide valuable information that enables the University to focus on new methods to improve waste collection, diversion and reduction. And she has spent countless hours training grounds staff, as well as facilities staff throughout both campuses, on waste diversion and the three R’s (Reduce/Reuse/Recycle).  All of these efforts have helped York University to achieve a waste diversion rate of 66 per cent.

Regenesis York is a community, environmental and social justice organization empowering students as initiators of change at York University since 2007. The Regenesis team has conducted research and outreach that has led to positive, tangible changes on campus and in our local community. Recently, Regenesis York has led two major initiatives: Cycle York, which uses both advocacy and service resulting in bike repair, bike clinics and group rides that promote active living, equitable access and a four seasons biking culture at York and in the local community. And, in partnership with the Food Services Department, Regenesis organized the York University Market, a weekly produce and artisan market that provides healthy, local and organic food goods to the York community.

Shoukri thanked the award recipients, students, staff, faculty members and researchers for their ongoing commitment to make York University a global leader in sustainability practice and research. He issued special appreciation to York Vice-President Finance and Administration Gary Brewer, York University Development Corporation (YUDC) President Bud Purves, Richard Francki, assistant vice-president, CSBO and the CSBO team, for their work in sustainability. He thanked members of the President’s Sustainability Council for their volunteer work and paid special tribute to Bunch, who is the council’s new chair. He thanked the University’s deans for their commitment to sustainability leadership in academic programming, teaching and research.

The event ended with a special presentation by Purves to Shoukri of a framed certificate marking the successful LEED Silver Certification of the Kaneff Tower, which is home to York University’s senior administration and researchers. The tower sits on top of the Archives of Ontario Building and was built in 2010.

“York University showed early leadership in sustainability,” said Purves, noting that the new Pan Am/Para Pan Am Stadium, the Life Sciences Building and the new Bergeron Centre for Engineering Excellence, were all being built to LEED standards.

To cap off the day, groups of York University employees volunteered their time as part of a pan-University 20-minute Cleanup of the campus woodlots and roadways.

For more information on York University’s commitment to sustainability and the environment, visit the Sustainability website and the CSBO website.