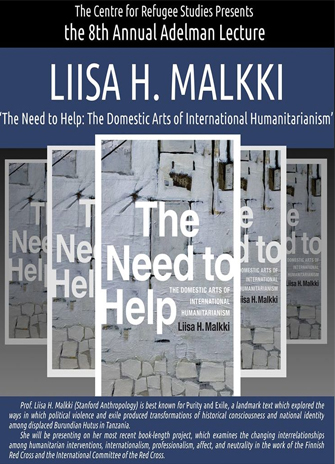 Malkki will discuss her most recent book-length project, “The Need to Help: The Domestic Arts of International Humanitarianism,” on Monday, May 4, from 5 to 7:30pm, at 519 Kaneff Tower, Keele campus. This event is free and open to the public.

In her project, based on fieldwork from 1995 to the present, she examines the changing interrelationships among humanitarian interventions, internationalism, professionalism, affect and neutrality in the work of the Finnish Red Cross and the International Committee of the Red Cross. In doing so, she shifts the focus of the study of humanitarian intervention from aid recipients to aid workers themselves.

Malkki is best known for Purity and Exile: Violence, Memory, and National Cosmology Among Hutu Refugees in Tanzania (Chicago University Press, 1995). It was considered a landmark text that explored the ways in which political violence and exile produced transformations of historical consciousness and national identity among displaced Burundian Hutus in Tanzania.

The Annual Howard Adelman Lecture is sponsored by the Centre for Refugee Studies, the Office of the Vice-President Research and Innovation, the Departments of Anthropology, Political Science, and Languages, Literatures & Linguistics in the Faculty of Liberal Arts & Professional Studies.