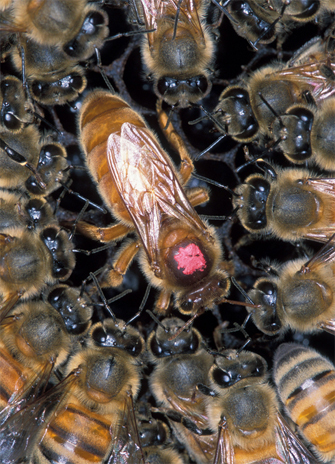 A genetic test developed by researchers at the University of Sydney and York University has the potential to prevent the spread of Africanized honey bees around the world.

Africanized honey bees or “killer bees” as they are commonly known, are the result of a failed experiment by Brazilian scientist and geneticist that was conducted in the 1950s. Warwick Kerr imported bees from Africa and bred them with European honey bees used in Brazil with the hope of creating a super productive and gentle breed of bees for beekeeping.

The resulting hybrid honey bee proved to be highly aggressive with little improvement in honey production. The hybrid was released by accident into the environment and has since moved from Brazil to other countries including the southern United States.

“The Africanized bees are very aggressive in an interesting way because they are collectively aggressive,” says Amro Zayed, a professor in the Department of Biology in York University’s Faculty of Science. “With Africanized bees all you need are a few molecules of the alarm pheromone and they will gang up on the intruder. They attack with force, literally hundreds of bees attack you versus one or two European honey bees.”

Since Africanized honey bees are so difficult to manage relative to European honey bees used by Canadian and Australian beekeepers, the international trade in honey bees is restricted, due in part to bans on the importation of queens from countries such as the United States, where Africanized honey bees are present. Current tests to determine Africanized genetic material have a high error rate and are expensive. The new test developed by the University of Sydney and York University researchers is very accurate and can be evolved into a cost-effective test.

“Our genetic test is highly accurate and considerably more sophisticated than the old tests that have a high tendency to misclassify hybrid bees,” says Zayed.

“Having a tool that can identify desirable and undesirable bee subspecies will be of value to breeding and conservation programs throughout the world,” says lead author of the study, Professor Nadine Chapman from the School of Biological Sciences, University of Sydney. “Pollination of crops by honey bees adds many billions of dollars to the world economy, so any strategy that can prevent losses is an important contribution to food security.”

The new genetic test developed by researchers at the University of Sydney and York University has the potential prevent the spread of Africanized honey bees around the world. “We picked these mutations from a database of over 12 million mutations found in honey bees that we discovered here at York University” says co-author of the study, Brock Harpur, a doctoral student in the Department of Biology.

“The Canadian Food Inspection Agency is very concerned about the accidental importation of Africanized honey bees among bee imports from the United States, and we are very proud to be able to translate our pure research on honey bee genetics to help develop a test that can make bee importations safer” explains Zayed.

The international study A SNP test to identify Africanized honeybees via proportion of ‘African’ ancestry, which also included researchers from the US Department of Agriculture and the Agricultural Research Council in South Africa, was published in Molecular Ecology Resources, April 20.