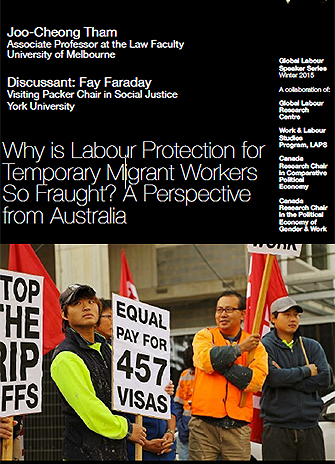 Why is labour protection for temporary migrant workers so fraught? The next speaker in the Global Labour Speakers Series will address the question from an Australian perspective Tuesday.

The 21st century has witnessed a growth in temporary labour migration schemes in Australia and Canada – traditionally countries of permanent settlement, says Professor Joo-Cheong Tham of the University of Melbourne’s Faculty of Law.

Tham will deliver the talk “Why is Labour Protection for Temporary Migrant Workers So Fraught? A Perspective from Australia” on Tuesday, April 21, from noon to 2pm at S701 Ross Building, Keele campus. Fay Faraday, the Visiting Packer Chair in Social Justice at York University, will be the talk’s discussant. Everyone is welcome. Refreshments will be served.

“Such a development has been surrounded in controversy,” says Tham, who has published extensively on the regulation of precarious work and political finance law. “Their advocates see temporary labour migration schemes as securing a ‘triple win’ for migrants, their countries and the countries of destinations, while critics consider them as paving the way for the exploitation of migrant workers, stunted development of their countries and displacement of local workers in host countries.”

One point of consensus is, however, clear in these debates, he adds. Temporary migrant workers should effectively enjoy the rights conferred under labour and employment laws. Yet, what is most uncontroversial may turn out to be the most complicated – evidence internationally and in Australia and Canada strongly suggests that breaches of labour and employment laws are endemic with temporary migrant work.

Why is this the case? Tham’s talk will provide an Australian perspective on this crucial question.

Tham’s research has been published in print and online media, and he has written more than 40 opinion pieces. He regularly speaks at public forums and has presented lectures at
the Commonwealth, South Australian and Victorian Parliaments in Australia. He has also given evidence to parliamentary inquiries into terrorism laws and political finance law, and has written several reports for the New South Wales Electoral Commission.

His research on the regulation of precarious work is currently focused on the challenges posed by temporary migrant work in Australia – particularly, the precariousness of such work. Together with Iain Campbell of the Centre for Applied Social Research at the Royal Melbourne Institute of Technology University, he is leading an Australian Research Council project on this topic, which will include a comparison of the Australian and Canadian experiences of temporary labour migration, that will be undertaken with Professor Judy Fudge of Kent University.