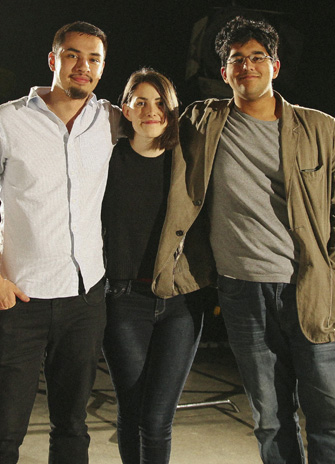 Three York University undergraduate film students are competing against 120 other teams of indie filmmakers for the chance to win up to $1 million in feature film funding, plus theatrical release of their production.

The York team’s submission, Fantome, is a dark psychological thriller set in a superstitious small town. A reckless, confrontational non-believer comes face-to-face with her personal demons and the spiritual aberrations that pervade the community after the death of her youngest sibling.

The project is the brainchild of fourth-year student Erica Orofino, the film’s screenwriter and director, who leads the Fantome team together with her classmates, Abdul Malik (co-producer and marketing) and Jonathan Elliott (co-producer and director of photography). The trio is supported by a host of other talent drawn from York’s film program. Key players include fourth-year student Aaron DiMaria serving as first assistant camera, third-year student Shane R. Preston as editor, and second-year student Shant Joshi as co-producer. An even wider group is pulled together as needed, shoot by shoot.

The competition, called CineCoup, is a film accelerator and disruptive studio model for indie filmmakers to develop, market and produce feature films. Filmmaking teams apply to CineCoup with a movie trailer, then advance through a “gamified” selection funnel using CineCoup’s social web platform. With 12 challenges between five levels, the competition is repeatedly halved based on an algorithm blending fan response and merit determined by CineCoup, with the high scorers moving forward.

All filmmakers who participate stand to gain valuable audience feedback, social media savvy and a professional promo package bolstered by fan support. The final five projects will be optioned for development. At this last level, the filmmakers will be flown to Banff to be coached in presentation skills and then pitch their production to industry insiders and a live audience. One will be selected for up to $1 million in production financing and screening in Cineplex Theatres.

Fan support is critical to maintain a high ranking and stay in contention. As the competition progresses, project teams create and upload a series of assignments, or “missions”, for their films. Supporters follow, comment and pick their faves.

With the first elimination round completed, voting for the top 30 starts April 20. Check out the Fantome page at cinecoup.com/fantome-film and vote on the missions that will help Fantome stay at the front of the pack. Fantome can also be found on Facebook,  Instagram and Twitter.

In part to make Fantome, but also as an umbrella for their other collaborative projects, the York students formed a production company last summer called Paper Frame Pictures. Originally they had planned to approach Telefilm for funding for Fantome, but discovered students are no longer eligible for the grant program they had in mind. Hearing about CineCoup, they decided to give it a shot.

While the stakes are high and the pressure is ongoing, the filmmakers feel York has prepared them for the challenge.

“There’s a high level of professionalism and camaraderie among the students I’ve gotten to know, and if I hadn’t met them, this project wouldn’t be what it is right now – or maybe wouldn’t be at all,” Orofino said. “I’ve loved my time in York’s screenwriting program. I’ve had great teachers. I feel that Amnon Buchbinder and Howard Wiseman, in particular, have shaped me as a writer. They’ve not only helped develop my skills, they’ve also taught me to have a good attitude and to value criticism, which has made me a much stronger artist.”

“I think York’s film production program is a well-rounded program that allows students to find and follow their specific filmmaking path, whether it be editing, sound mixing, shooting or directing,” said Elliott.

“York is how we met and that’s the most valuable thing for us,” said Malik. “York gave us the skills to do this, and the opportunities that got us this far. That’s worth a lot more than the degree. But the degree is nice too!”