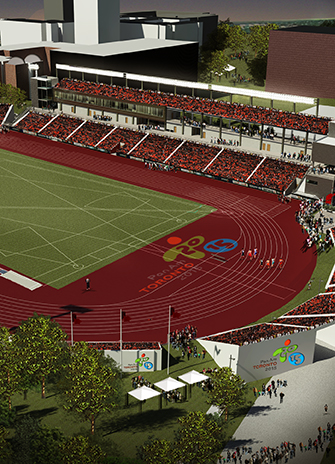 The new CIBC Pan Am/Parapan Am Athletics Stadium at York University will welcome thousands of athletes from 41 countries in Latin America, South America, the Caribbean and North America this summer who will participate in the Toronto 2015 Pan Am/Parapan Am Games.

“This is a once in a lifetime event,” says Helen Psathas, senior manager, environmental design and sustainability, CSBO. “York is being transformed this summer.”

More than 7,000 international athletes will descend on Toronto to compete in 36 Pan Am sports and 15 Parapan Am sports, many of which will represent their countries in the athletics portion of the Games at York’s new facility. To accommodate such a high-profile event, the stadium has to be the best of the best and to that end, the 400-metre track at the stadium is no ordinary running surface. It is a synthetic surface designed for the highest levels of international competition.

Designed for certification by the International Association of Athletics Federations (IAAF) as a Class 1 track, it will undergo rigorous testing to ensure the appropriate thickness, smoothness, strength of material, proper drainage and consistent colour before the first athlete steps foot on it. There are only two other IAAF-certified Class 1 tracks in Canada – one in Moncton, N.B. and the other in Sherbrooke, Que.

The infield has been sown with a blend of specifically chosen grass varieties and will be trimmed to exactly one inch in height at the start of the Games. The detail that goes into building and preparing a stadium for this level of competition is exacting, but it ensures that the athletes will have a consistent, high-quality venue – the best in the world.

“It’s all highly specialized in design and construction, regulated at a very high level, and it’s monitored so athletes are performing on the best level of surface and track,” says Psathas.

The stadium will host all track and field events, including the showcase 100-metre sprint, as well other distances from 200 metres to 10,000 metres, wheel chair races, and throwing and jumping disciplines during the Pan Am and Parapan Am Games.

In addition to athlete change rooms, equipment storage and classroom space, the stadium also boasts professional broadcast capabilities and a spectacular 50-foot-wide by 25-foot-high video board with high definition. It will also offer unobstructed views from the grandstand and will have permanent and temporary seating for some 12,500 spectators. Post-Games, it will seat 5,000.

“This amazing new facility is a game changer for York,” says Jennifer Myers, the University’s director of sport and recreation. Not only will it help us recruit top student-athletes, leading to more success, it will provide much-needed space for student programming and most certainly become a point of pride for the University. There is nothing like it in the OUA (Ontario University Athletics).”

It is also a certified Leadership in Energy and Environmental Design (LEED) building, ensuring its design, construction and operation are all sustainable.

In addition, the CIBC Pan Am/Parapan Am Athletics Stadium is fully accessible, as it was designed to also host the Parapan Am Games.

“On top of all the regular AODA (Accessibility for Ontarians with Disabilities Act) compliance pieces we would normally look at, special attention was paid to the stadium’s accessibility for Parapan Am athletes,” says Myers. “The hallways were designed so that racing chairs could pass each other.”

It also meant the creation of accessible washrooms with hydraulic change tables that can go up and down in height, as well as family washrooms and accessible rescue areas.

Following the Games, the stadium will become part of York University’s sport and recreation facilities, giving York student-athletes a world-class sporting venue to train and compete in.

“We’re hoping, post-Games, that it will mark the beginning of a re-genesis for sport and recreation at York,” says Myers. “In the long run, this will be a multi-use stadium that is programmed extensively for student use. That transforms this corner of the University.”

It will also be used after the Games to host other local school events, and will be available for rent to the community. It won’t just be used for sporting events post-Games, it will also provide a venue for orientation events, concerts, move nights and more.

“This is an element that really changes the way we can do programming on campus,” says Myers.

To learn more about the Games at York, visit the York Pan Am/Parapan Am Games website or the PanAm Games page in YU Link,under Employee Resources.