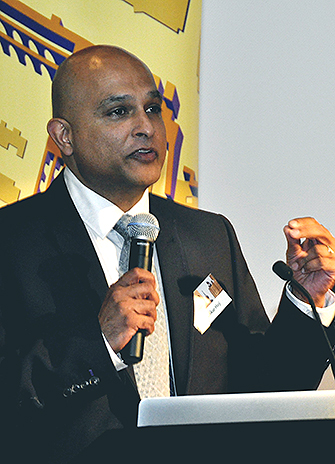 Anthropology Professor Zulfikar Hirji’s research on Islam and Muslim societies has secured him this year’s York Fellowship at the Pontifical Institute of Mediaeval Studies (PIMS).

Based out of the University of Toronto, PIMS is Canada’s oldest research institute in the humanities and will provide Hirji with an on-site office, research resources and community support of scholars, as he continues to teach and perform his duties as graduate program director in social anthropology at York University’s Faculty of Liberal Arts and Professional Studies.

The institute wants to expand their interests beyond Christianity and Judaism in the medieval period, says Hirji. “So when they expressed the idea they wanted to broaden their scholarly interest to the Abrahamic tradition in its fullest sense, that is the traditions which stem around the figure of Abraham –Christianity, Judaism and Islam – then I thought that this was a great opportunity to work with a high calibre, world-renown group of scholars working on religion and religious communities in the medieval period, but extending pretty much all the way to the 17th and 18th century.”

Hirji’s research typically focuses on contemporary issues, but his interests in Islam and Muslim societies reaches back to the foundations of the Islamic tradition in the seventh century C.E.

“Contemporary understandings of Islam, like many things, can’t be isolated to the contemporary context. They have to extend well earlier. As we see, many contemporary Muslim communities and movements and political groups and so on articulate their understanding of Islam with reference to the past and the founding period of Islam. And if you don’t understand the complex formation of that past, you can’t really grasp what Muslims today are expressing and the roots of their perspectives,” he says.

While on the year-long fellowship, which begins in the fall of 2015, Hirji will write chapters for a recently commissioned, illustrated and accessible book about Islam and Muslims, including the variety of Muslim expressions and diversity within Muslim communities. He hopes the book will shed light on what Muslims share in common with each other and with Jews and Christians. He also hopes to dispel the view that Islam is “dogmatic” and “monolithic” and that all Muslims express their understanding of Islam in exactly the same way.

“The differences between Muslims have often been characterized in doctrinal terms: Sunni, Shia, others. But in fact, even within those communities, there’s incredible diversity… of dress, of histories, of geographical locations, you name it. Diversity amongst Muslims is not just about doctrines and practices. It extends to many other complex issues of human experience. And expressions of faith, in my view, are difficult to express outside of language, outside of culture,” he said. “Languages and cultures evolve.”

Hirji adds that the histories of Islam have frequently been written from a Middle East perspective and he aims to go beyond that with his book.

“We know as early as the eighth and ninth centuries, Muslims were travelling outside the Arabian Peninsula to South East Asia, they were travelling to the eastern coast of Africa, they were moving through Central Asia. Our knowledge of the histories of communities who did not reside in the Arabian Peninsula tends to receive limited attention. So, among other things, the book will seek to encompass those histories as integral to our understanding of the formation and development of Islamic history,” he says.

In a time when “funding is relatively scarce and where new hires are few and far between, we bring people together in other ways for limited periods of time to focus on topics and subjects of mutual interest,” says PIMS President Richard Alway. “The York Fellow brings a unique background and strength to what we’re doing here at the institute. For the second year, it’s proving to be a tremendous success.”