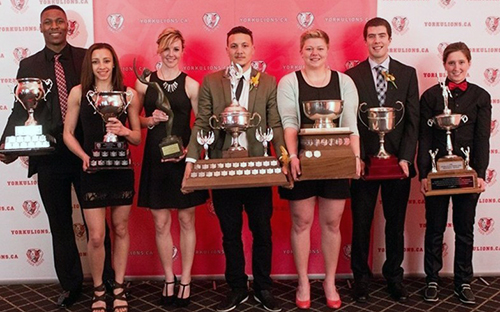 Whiteman is the third men’s soccer player to receive the honour, and the first since 2010, while Crew is the third straight women’s track and field athlete to be named Female Athlete of the Year.

Also receiving major awards at the event were David McKay from the men’s track and field team and Jennifer Black from the women’s volleyball team, who took home the Outstanding Male Graduate Award and the Bryce M. Taylor Award, respectively, and Lisa Stathopulos, who was named the recipient of the Charles Saundercook Memorial Trophy. Josh Henderson from men’s volleyball and Alexandria Town from women’s wrestling were named the top Rookies of the Year, and soccer coach Carmine Isacco received the Coach of the Year award.

Whiteman was the best player on the best men’s soccer team in the country this year. He finished the regular season second in Ontario University Athletics (OUA) scoring and tied for first in conference playoff scoring. He earned the OUA West’s Most Valuable Player (MVP) award and was nominated for the Canadian Interuniversity Sport (CIS) honour, and also earned first-team OUA all-star and CIS all-Canadian honours. Whiteman was named the Player of the Match in the OUA final and helped the Lions win the OUA and CIS banners and record an undefeated season.

Female Athlete of the Year: Brittany Crew, track and field

Crew had a banner year while en route to establishing herself as the best thrower in the country. She went undefeated in the shot put and reached the podium in every weight throw competition she entered in the regular season. She swept the gold medals in the shot put and weight throw events at the OUA and CIS championships, and at the conference meet she broke the records in both events while also setting new York records in both. Crew earned the OUA and CIS field events Athlete of the Year awards and was also a first-team OUA all-star and CIS all-Canadian. She helped the Lions earn the CIS team bronze medal, the best result for the program since 1996.

McKay is the inaugural recipient of the Outstanding Male Graduate Award, which is given to a male student who has, throughout the undergraduate years, made outstanding contributions to York University. He established himself as one of York’s top student-athletes in his four years with the Lions. His athletic accomplishments are numerous: He won four OUA gold medals and three CIS titles in the pole vault, and helped the Lions win the team banner in 2014. He is a four-time OUA all-star and three-time CIS all-Canadian, was the OUA Rookie of the Year in 2012 and York’s Male Athlete of the Year in 2013. In addition to his success at the track, he was also team captain, a student mentor in the PAWS program, a team representative on the York Sport Council and was involved in numerous community outreach initiatives, including working with the Special Olympics.

Black is the first women’s volleyball player to win the Bryce M. Taylor Award, which is presented to a graduating female student who has throughout the undergraduate years made outstanding contributions to interuniversity sport at York University. On the court, she was a regular starter at libero and finished in the top 10 in the OUA in digs per set three times in five years. She excelled in the classroom, earning CIS academic all-Canadian honours twice and last year she had the highest GPA of all female student-athletes at York. Black is also the team captain, a student mentor in the PAWS program and her team’s representative on the York Sport Council. In each of the past two years, she has organized a Dig for a Cure event to raise money for the Canadian Cancer Society, and she is actively involved in many other community service initiatives around campus. She capped her season by earning the OUA women’s volleyball Award of Merit this year.

Stathopulos is the first female to win the Charles Saundercook Memorial Trophy after the criteria was changed this year to open the award to all student-athletes. The trophy is presented to the student-athlete who best exemplifies the qualities of perseverance, sportsmanship, enthusiasm for life and the consideration of others. Stathopulos epitomized perseverance and put together one of the best seasons ever by a York women’s hockey player. After missing all but three games last year because of a concussion, she returned to the lineup this season and played all 24 games on the top line. Playing in her final season with the Lions, she led the OUA in points and goals to win the OUA Player of the Year award, the first in York history, and was named a first-team OUA all-star and CIS all-Canadian for the first time. Stathopulos also served as a co-captain and helped the Lions more than double their wins total from last year.

Isacco is York University’s Coach of the Year for the second time, as he also won the inaugural award in 2011. He won the OUA and CIS Coach of the Year awards after leading the Lions men’s soccer team to an undefeated season and the OUA and CIS banners. The Lions scored more goals and allowed fewer than every other team in the country, and they have consistently been among the top programs in the CIS since Isacco took over in 2007. The team has been nationally ranked in 41 straight polls dating back to October 2010, and has won three OUA and CIS banners under his leadership.

Henderson is the first men’s volleyball player to win the Rookie of the Year award. He put together the best-ever rookie season by a York men’s volleyball player. He became the first player from the program to earn the CIS Rookie of the Year award and the second to win the OUA honour while helping the Lions win the team bronze medal and qualify for the CIS championships for the first time in 10 years. He finished sixth in the OUA in kills per set and points per set, and was also in the top 25 in digs per set and blocks per set.

Town is the first women’s wrestler to win the Rookie of the Year award. She put her name into the Lions’ history book this season by winning the OUA silver medal, becoming the first York wrestler to win an OUA medal and qualify for the CIS championships, where she finished in fifth place in her weight class. She earned OUA second-team all-star honours and, during the regular season reached, the podium at three different meets.