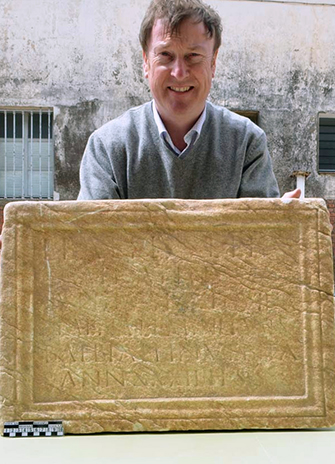 The Oxford Handbook of Roman Epigraphy is more than a collection of inscriptions; it is a resource created to show why inscriptions matter.

Edited by York University history and classical studies Professor Jonathan Edmondson and University of Toronto classics Professor Christer Bruun, this handbook is the most complete collection of scholarship on Roman epigraphy – the study of inscriptions – currently available. Launched at the British School at Rome in February, it focuses on the Roman world from c. 500 BCE to 500 CE and beyond.

Inscriptions were cut into stone monuments, engraved on metal plaques or other objects and stamped onto ceramics or traced with a stylus on waxed writing tablets, says Edmondson. They were also painted on walls, wooden boards or wooden writing tablets, or scratched as graffiti onto walls in the streets of Roman towns or inside Roman homes.

“We purposely chose to tackle the subject of ‘Roman epigraphy’ as opposed to ‘Latin epigraphy,’ to reflect the fact that the Roman Empire was a polyglot, multicultural society, where a host of languages continued to be spoken, and where inscriptions were set up mostly in Latin and in Greek, but also in a number of local languages,” he says. “We also chose to assemble as international a group of scholars as possible to write the 35 chapters, so that we could represent the broadest traditions of current epigraphy in our volume.”

This compilation’s chapters, written by 28 senior and rising scholars from nine countries, sheds light on Roman culture, from public life to slavery, the lives of women, the military and life in the provinces.

“We also emphasize that new inscriptions are constantly being discovered, and we have tried to incorporate a number of the latest discoveries alongside more familiar, long since known inscriptions to convey excitement of epigraphic research,” says Edmondson.

Understanding Roman epigraphy and how to work with its sources is important for those who want to understand the Roman world, whether they are students or scholars from a variety of disciplines, including history, archaeology, literary studies, religious studies and anthropology.

“While inscriptions have attracted scholarly interest since Renaissance humanists started to rediscover key texts from the city of Rome, Italy and the provinces of the Roman Empire, and then to gather them together in epigraphic corpora from the early 15th century onwards, we felt that they have tended to be undervalued in university courses on Rome and the Roman Empire, especially in the Anglophone world,” says Edmondson. “After reading our book, we feel that readers should have gained a clear understanding of how to use inscriptions in their own research and, at the same time, should have a sense of what inscriptions can and cannot tell us about the Roman world.”