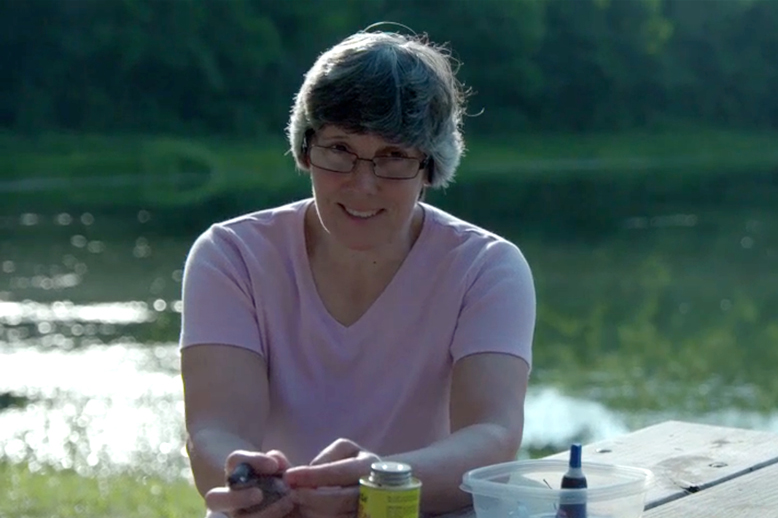 Bridget Stutchbury in a scene from “SongbirdSOS”

Birdsong that has graced the Earth for millions of years – and for all of human history – could soon be stilled in a human-made perfect-storm of negligence and unintended consequences.

SongbirdSOS is the artfully-shot story of the mass depletion of songbirds in the Americas, an alarming thinning of populations that has seen declines of many species since the 1960s.  According to international birding expert and York University biology Professor Bridget Stutchbury, who is featured in the documentary, we may have lost almost half the songbirds that filled the skies 50 years ago.

SongbirdSOS, which debuts on CBC-TV’s “The Nature Of Things” on March 19, is a wide-ranging zoological whodunnit that takes the viewer through a stunning variety of human-made perils that have afflicted species from warblers to orioles to grosbeaks to thrushes. On a hopeful note, it also shines a light on some ingenious approaches to the threat, and the on-the-ground heroes making them happen.

Songbird hazards include: glass-enclosed high-rise buildings that account for up to a billion bird deaths annually, light pollution that disorients birds’ migratory flight paths, lost breeding and wintering habitats from rain forests to wetlands to Boreal forests, oil pipelines and farm pesticides. And contributing to the declines are cats; believed to cause at least another billion bird deaths per year.

There’s unforgettable real-time frontline research in SongbirdSOS. Michael Mesure of the volunteer army FLAP  (Fatal Light Awareness Program) Canada shows a toll of thousands of birds on a tour of particularly lethal Toronto buildings, along with some buildings that have been made less so by design. Erin Bayne takes us into the Boreal forest north of Edmonton, Alberta to witness the impact of industry on North America’s biggest bird nursery. In Saskatchewan avian eco-toxicologist Christy Morrissey discovers lethal neonicotinoids in the spring wetland water supply, ahead of its annual application by local farmers. In a revelatory sequence, Bridget Stutchbury equips northern Purple Martins with micro-chip backpacks that reveal the secrets of their oddly non-linear migratory journeys to South America and back.

And there’s a glimpse of hope for the future, as coffee farmers from Costa Rica learn from ornithologist Alejandra Martinez-Salinas about the benefits of pesticide-free shade-grown coffee.  The diversity of shade trees could provide the birds better habitat and the songbirds’ appetite for insects can care of pests, making it less essential to spray with agro-chemicals.

Over the course of a year, following the seasons and the birds, SongbirdSOS director Su Rynard and the team set out on a journey of discovery.

“We discovered that the causes of songbird declines are many, and the solutions are few,” states Rynard. “Yet everywhere we went, we met passionate people who are concerned and are working for change – as this is not just about the future of birds, it’s about the health of the planet too.”