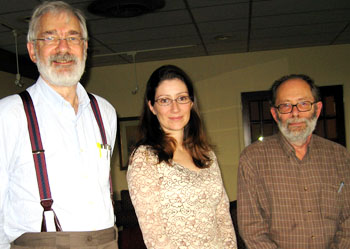 The following tribute to Professor William “Bill” Greaves, a senior scholar and professor emeritus of English at Glendon, was submitted to YFile by Marika Kemeny, who recently retired from her roles as Glendon’s communications officer and YFile‘s chief correspondent for Glendon. Professor Greaves died on Sept. 27, 2014 in his 80th year following a long battle with multiple myeloma.

A familiar sight on the Glendon campus, wearing his signature shorts and suspenders in all seasons and a twinkle in his eye, professor of linguistics Bill Greaves was much loved by his students and universally respected by his colleagues.

Born in New Haven, Connecticut, William Southworth Greaves Jr. died of multiple myeloma in his 80th year, on September 27, 2014. He was a graduate of Yale College (Class of 1957) and University of Toronto (MA); he had also completed post-graduate studies at University College, University of London. Greaves was professor emeritus and senior scholar at Glendon’s Department of English Language and Literature.

Glendon marked Greaves’ passing and celebrated his achievements at a memorial event on March 17, attended by his widow and other members of his family, as well as numerous colleagues and Glendon staff members.

Former colleague, Professor Michael Cummings and four graduating Glendon students, Tea Avdylaj, Ophelia Ho, Nathalia Saldarriaga and Megan Joyce, currently working on a research project started by Greaves, were among those who spoke about his achievements. “He was a passionate teacher, who shared his knowledge and always took the time to get to know each of us,” one of the students commented. “He had a way of engaging the listener, whatever subject he chose to address. He encouraged us to learn more and taught us that nothing is impossible to achieve.”

A musical interlude of Bach’s Herzlich thut mich verlagen, played by pianist Doreen Uren Simmons, lifelong friend of the Greaves family, was followed by a loving and humorous tribute by William Greaves to his father. “He taught me techniques for learning and public speaking, starting in the third grade. He was a good teacher and a good father.”

A Renaissance scholar specializing in Spenser and Milton, Greaves joined the recently created Glendon English Department in 1967. His annual 12-hour reading of Paradise Lost by his class soon became legendary and is still remembered by many.

He established a collegial collaboration, as well as a lifelong friendship, with professor James (Jim) Benson, who preceded him in the department by one year. “We were both specialists in English Literature, but Michael Gregory, the chair of the department, had a broad vision of ‘English’, that brought together linguistics, second-language learning and drama in one shared place,” remarked Benson. “It was the 1960s; York was new, Glendon was newer, and we all wanted to create something innovative and exciting within Escott Reid’s vision of a bilingual college. It was inevitable that Bill and I would work together on research and publications, which we did from 1973 onwards.”

The nearly 50 years of their collaboration resulted in numerous books, several book chapters and many articles published in learned journals. Their close working relationship with primatologist Sue Savage-Rumbaugh of the Iowa Primate Sanctuary opened up a whole new interdisciplinary world of collaboration with biologists, neuroscientists and computer scientists. From the beginning, Greaves encouraged his students to participate in their work. They were engaged in a multi-location, multi-year research project. It’s goal was to produce a searchable database of video clips of Bonobo-human conversations, documenting the language capacities of the Bonobos and extending scientific understanding of how language evolved.

Greaves and Benson’s internationally recognized research also attracted outsiders, such as best-selling author Sara Gruen, who came to Glendon to do background research for her hugely successful novel, Ape House in 2006 and made time for a return visit with Glendon’s Bonobo-human discourse research group in 2010.

“Bill enthused about literature, delighted in exploring language, and went on to investigate interspecies communication, artificial intelligence, discourse, phonology and other domains,” explained one-time chair of Glendon’s English Department, Professor David Cooke in a testimonial he sent from New Zealand, where he now lives and works. “He told me once that he would tune into the speech of people lining up at the cafeteria checkout, so he could monitor their phonological patterns. He encouraged graduate students and his colleagues to explore and engage in scholarship, learning and research. And let’s not forget his love of Glendon. He was and is our inspiring colleague.”

For the past five years, Greaves and Benson have directed a research program on Bonobo-human discourse, publishing their findings widely within the international Systemic-Functional Linguistics community. During the summer of 2014, the slow work of cataloging and transcribing the 400 hours of video archive presented the opportunity to do a large-scale study, and Greaves came up with the idea of mining the data for evidence that the Bonobos could successfully answer ‘wh’ questions: who, what, why, when, where. He was involved in this work throughout the summer of 2014, his last. The research team’s findings will be presented this summer by three Glendon graduating students in this field, with the title ‘The Exchange of Information Between Human and Non-Human Primates’ at the 42nd Systemic Functional Congress in Aachen, Germany.

“Bill had an inexhaustible supply of ideas and projects, and his commitment was always long-term”, said Benson. “We worked together with school boards on professional development for a decade. We subsequently moved on to become regulars at international conferences of systemic linguists.” He forged ahead on other fronts as well, running a summer French-immersion camp for school children in conjunction with Canadian Parents for French for 10 years; collaborating with Michael Halliday on a book on intonation – another 10-year project; and working with colleagues and students in China, India, Australia, Argentina, and Brazil. In examining language as it is used, Greaves liked to comment that “linguistic analysis in’t rocket science – it is much more complex than that.”

Bill Greaves will be remembered as a passionate educator and scholar; a competitive sailor and fencer and sometime cross-country skier; an alumnus and supporter of Goodenough College, London, England; the creative engineer and steward of the land at Cragmoor Farm in Prince Edward County; a lover of red wine and woodfires; and an enthusiast of both Richard Wagner’s The Ring Cycle and New England whaling songs. In both his academic and his personal life, his glass was always half full.

“Bill was the kind of teacher whose enthusiasm led his students to achieve things they would never have dreamed of, just as it did for me,” added Benson.

The William Greaves Fund in Linguistics has been created to establish an annual award for excellence in linguistics studies at Glendon College, York University. Donations may be made to this fund and/or to Princess Margaret Hospital in his memory.