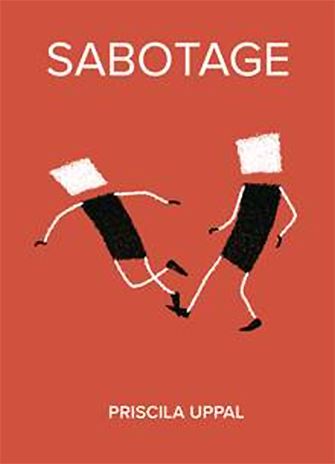 Humour is a bully. It keeps us from drowning in our own grief. So says York University English Professor and poet Priscila Uppal, who spikes her latest collection of poems, Sabotage, with large dollops of her wry, cheeky wit.

In Sabotage, published by Mansfield Press and Bloodaxe Books, Uppal exposes the absurdity of life, its sudden twists and plunges into darkness, its cobwebbed, dusty corners and dangling carcasses. But this saboteur is laughing as she pries open the heavy doors of life’s traumas and tragedies.

In some ways, this new collection is an extension of her 2010 book Traumatology (see YFile), but in Sabotage no subject is off limits as she explores violations of culture, the human body, family or nation. “The book really is about a lot of our assumptions and the fact that we create these assumptions to make ourselves feel safe and predictable and stable. But so many of these assumptions are built on illusions and our imagination, and can crack at any time and blow up in our face,” she says. “I’ve just grown up always knowing things can fall apart at the drop of a dime.”

The book will launch Monday, March 23, at 7:30pm at the Monarch Tavern, 12 Clinton St., Toronto. Everyone is welcome.

Sabotage is divided into six sections – accusations, discussions, adaptations, riddles, arguments and defenses. Uppal’s playfulness is particularly evident in the adaptations section, where she looks at myths or historical moments through the “lens of a reality TV program.” The poem titles in this section are also from reality television shows. The First World War is revisited in the poem “Survivor,” and Henry VIII and his many wives are dissected in the poem “Temptation Island.” A history of the universe up to the present is detailed in “The Amazing Race.”

In the riddles section, Uppal has translated old Anglo-Saxon riddles into modern text and answers. “I’m trying to find what the equivalent answer is for the same riddle,” she says.

Chewing words. Wondrous engine, regurgitates at our asking from dusk until dawn the infinite utterances of mankind. Interloper, we are none the wiser by the consumption.

The moth of the old answer is eating through books and manuscripts, “but the new answer is Google, because it is an interloper and it eats up all our utterances and is called this amazing engine,” she says.

The remaining sections represent different ways to present a case. “You can accuse someone, you can defend someone, you can have a discussion about it, you can have an argument about it,” she says. “There are different ways of showing you’re adapting to something.” She looks at hypothetical situations and the “spaces where people are having trouble coping with the rules of the world as they exist.” Such is the case in the poem titled “Psych Ward,” where Uppal says the days are marked by “so many different routines that have nothing to do with their normal lives.”

In the poem “Inside Out”, Uppal says she “imagines a particular biological revolution where our bodies turn inside out and what that means, we are literally wearing our hearts on our sleeves, but are we any luckier in love, no.”

In “Identity Crisis,” she tackles everyone’s assumption they will have an identity crisis at some time in their lives and that will be the moment they find out who they really are. The poem begins: “My cat thinks it’s a dog, my dog thinks it’s a horse, my horse thinks it’s a car.…”

As Uppal says, “I think that anxiety and that dissatisfaction of where one is runs through much of the book…. Even when you’re hopeful, usually something else comes along and you have to keep revising … You’re constantly having to revise what your story is because of what’s been dropped in your life this time. I think we all face that.”

The difference is that Uppal likes to acknowledge the absurdity of it all.