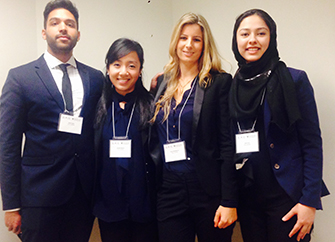 The Master of Public Policy, Administration & Law (MPPAL) case competition team from the Faculty of Graduate Studies at York University was made up of York students Paula Biebelheimer, Suhail Iqbal, Jennifer Nguyen and Sadaf Syed. They were coached by York Professors Naomi Couto and John Wilkins.

This fourth annual national competition attracted 11 teams from graduate programs across Canada. The teams were drawn into two divisions to present their review of a futuristic case on the Canadian infrastructure deficit. The judges named the teams from Simon Fraser University (the 2013 champions) and the University of Toronto (2014 champions) as division winners. The two teams advanced to the lightning round to work on a case about a prospective Pan Am Games boycott. The team from Simon Fraser University prevailed over the University of Toronto team.

The MPPAL team took the initiative to confer with the judges afterwards on how they did. Even though IPAC/CAPPA only announces the two finalists, York finished a nose behind the University of Toronto in its group. On the flight home, the team worked on a strategy for how to improve next year.