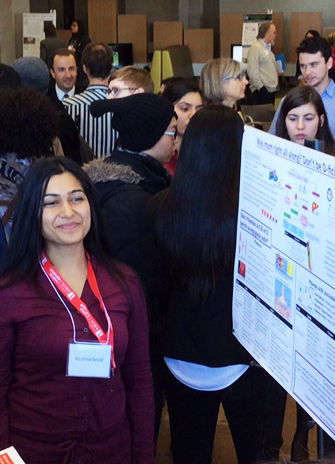 Scott Library’s Collaboratory, the site of York University’s third annual Undergraduate Research Fair, was buzzing with energy and excitement on Feb. 25 as 73 students got ready to share the results of their research with the York community. They had quite an audience. In all, more than 350 people – from faculty, staff and students to proud parents – attended the fair.

The student researchers came from all Faculties and both campuses. They presented 56 posters that spanned a range of topics with intriguing titles such as:

The multidisciplinary fair, co-sponsored by York University Libraries and the Office of the Vice-President, Research and Innovation (VPRI), benefited this year from additional financial support from the Faculties and other generous donors. In his opening remarks, VPRI Robert Haché thanked all the applicants for demonstrating that research at York is accessible and emphasized that undergraduate students are a valuable part of the University’s research culture.

“Here at York, we value the work of all of our student researchers,” said Haché. “As a comprehensive, research-intensive institution, York is committed to exposing all our students to cutting-edge research and scholarship, and to making research accessible for them.”

“The scope of submissions was extraordinary and so was the passion and commitment of the students,” said event MC and Interim University Librarian Catherine Davidson. “For me, hearing the students speak about their work and about how much they appreciated the opportunity to share the outcome of their research with the broader community was the highlight of the fair.”

Both Peggy Warren and Dana Craig, co-founders of the Undergraduate Research Fair, emphasized that the event is truly for students and about students. In addition to fair presenters, undergraduates are represented on the steering committee and, new this year, the event featured the musical talent of a trio of student musicians from the York University Symphony Orchestra. The fair was documented by two student photographers from the School of the Arts, Media, Performance & Design.

In addition to the work conducted to translate their research papers to posters, student presenters will be invited to revise their papers into articles for consideration for publication in the library-sponsored e-journal YOUR Review (York Online Undergraduate Review), to be launched in 2015.

Some presenters used Twitter to express their thanks while others shared their thoughts in person. “This event has given me the confidence and affirmation that I can succeed,” said one student presenter. “I never considered grad school before yesterday, but I am in the process of applying now.”

“I was really energized by the enthusiasm of our undergraduate researchers,” said Singer, “and by the diverse and imaginative projects described in their impressive poster presentations. Bravo!”

The numerous high-calibre presentations made it a challenge for the adjudication teams to select the first and second prize winners of the following seven awards. The winners and their research were introduced to the York Community later that day at the York U Research Leaders celebration where they were able to mingle with graduate and faculty research award winners.