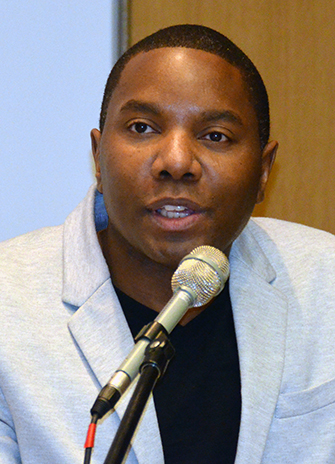 The BLSA created the Lincoln Alexander Award to pay tribute to the pioneering efforts of Alexander – an Osgoode graduate, the first black member of Canada’s Parliament and the 24th lieutenant-governor of Ontario – who died in 2012. The inaugural Lincoln Alexander Award was presented in 2013 to Justice Michael Tulloch (LLB ’89) of the Ontario Court of Appeal. Justice Donald McLeod of the Ontario Court of Justice received the 2014 award.

“I can’t even express how profound this honour is,” said Williams, who gave a passionate speech at the award ceremony, drawing attention to police shortcomings. He has also spoken at numerous universities, high schools and community forums throughout Toronto, particularly in connection with grassroots concerns about the proliferation and dissemination of non-conviction records which function as negative credentials.

Recently, Williams worked with a team of Toronto Star journalists to generate multimedia material for the widely read “Known to Police” investigative series, winner of a National Newspaper Award in 2014. An outcome of that series was the formation of the Osgoode Society Against Institutional Injustice (OSAII). Williams is an associate member of OSAII and co-coordinator of the Police Access Request Initiative, a project geared toward assisting everyday citizens with freedom of information queries.

In addition, Williams is a member of the Toronto Police Accountability Coalition, a group that encourages debate about police policy issues and is devoted to making the police more accountable to the public. He was also the designated subject matter expert for “This Issue Has Been With Us For Ages: A Community-Based Assessment of Police Contact Carding in 31 Division,” a report commissioned by the Toronto Police Services Board.

Williams holds a BA from York University, an MA from Carleton University and will complete his PhD at York this year. His scholarly work addresses racial profiling and systemic racism. His writings have been published in academic journals including Race & Class and the International Journal of Criminology and Sociological Theory among others.