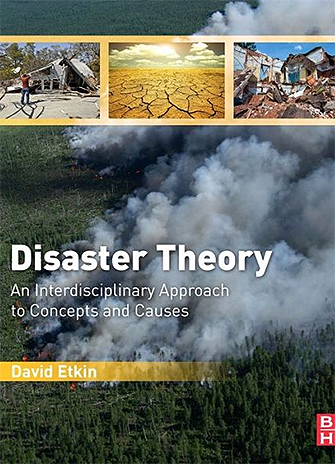 Hollywood’s portrayal of human reaction to disaster is a myth.

Disaster and emergency management Professor David Etkin breaks down myths and marries theory to practice in his new book Disaster Theory: An Interdisciplinary Approach to Concepts and Causes (Elsevier, 2015).

Disaster myths are one of the broad range of issues Etkin’s book covers. The most common myth is the idea that in the face of disaster, people will likely panic and commit selfish acts, he says, when in reality, they are more likely to act rationally and altruistically.

“When you go to movies – Hollywood movies – there’s a phrase: ‘You can’t tell them the truth. It will cause mass panic,’ ” says Etkin. “How many times have you heard that in a movie? It’s actually false. And yet, it’s believed by so many people. Crime rates generally go down during disasters because people behave in ways that are cooperative, though of course there are always some criminals who break the law. There have been a couple cases where disasters have triggered massive looting when there were serious underlying social problems, but, generally speaking, people don’t behave in antisocial ways. They behave in prosocial ways.”

He adds that in most disasters, the first people to help are nearby civilians and other victims, before first responders such as EMS, police and the fire department can arrive.

Disaster Theory was made to fill a gap in literature for the relatively new field of disaster management. Etkin wrote the book from the perspective of a lecturer, gearing it primarily towards graduate and advanced undergraduate students.

“There’s a need in the academic community for it,” he says. “There’s no other book quite like it because it takes a broad overview of disaster theory. I’ve been developing courses over many years and I thought it was time to broaden them, deepen them and turn them into a book.”

The book is also relevant to policymakers and practitioners in the field, says Etkin. After graduating, disaster and emergency management students tend to work in one of three major sectors: non-governmental organizations that are involved in such activities as disaster response and humanitarian aid; emergency management at the municipal, provincial, federal and international levels; and the private sector where they do business continuity planning.

In Disaster Theory, Etkin draws from disasters around the world. His case studies cross borders because so do disasters. Many disasters require a coordinated international response and have large ripple effects that can be global. It also makes sense to write about disasters from an international perspective because although each situation is unique, they have important commonalities, he adds.

Etkin’s examples also span history, referencing major disasters such as Hurricane Katrina in 2005 and the Lisbon earthquake of 1755, as well as those further in the past such as the burning of the library of Alexandria in the time of Julius Caesar.

“Disasters are timeless in the sense of lessons we learn from them,” he says. “The world is very different now from what it used to be, but what we’re doing is adding new layers onto the old…. We have new layers of cause and effect because of globalization and the advancement of technology. I think no disaster becomes irrelevant just because it’s older.”

The book also looks at economic and life loss, risk, vulnerability, resilience, ethics and management, among other disaster-related topics.

Etkin wants readers of Disaster Theory to walk away with foundational knowledge, a sense of the complexity of the subject matter, “a sense for how fascinating the theory is,” and, ultimately, a desire to explore issues yet to be understood.