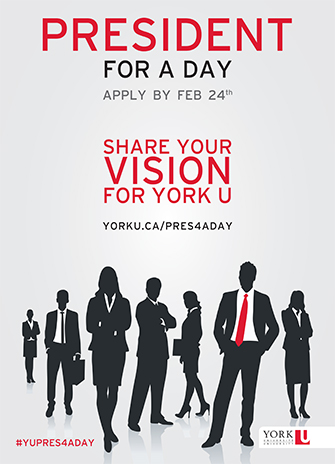 On March 16, one outstanding student leader will boldly go where only three undergraduates have gone before – behind the desk of York University’s President and Vice-Chancellor Mamdouh Shoukri.

The fourth annual President for a Day contest means there will soon be a vacancy in the president’s office that needs to be filled. Shoukri is going back to school, and one lucky undergraduate will take his place and oversee his presidential duties for the day.

Who will follow in the footsteps of former President for a Day winners Rabia Sajun, David Mayer and Emanuel Ebrahim? Will it be you?

On March 16, you can catch the president around campus attending lectures, seminars and maybe even grabbing a Booster Juice. Meanwhile, the contest winner will attend all of the president’s meetings and speaking engagements, and will have the opportunity to share his or her vision for York with senior administrators.

If you are a York undergraduate student and you think you have what it takes to be President for a Day, or if you know someone who might make a good candidate, submit a resume and a 500-word written or video essay on the following topic: “If you were appointed president of York University, what would your top three priorities be that would directly impact students?”

All submissions must be received no later than 11:59pm EST on Feb. 24. The submissions will then be reviewed by a selection committee and the winner will be announced on March 9.